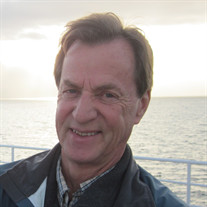 July 15, 2020 Dear Friends and Family, It has been almost 5 moths since Marty passed away. I think it is a blessing that God took him just before Covid-19 hit because it would have been awful not to be able to visit him during his last weeks or months of life. On the other hand, it makes me so sad that because of the virus we, his family and friends, haven’t been able to get together to celebrate his life. And I don’t foresee any possibility of that being able to happen any time in the near future. This Saturday, July 18, would have been Marty’s 71st birthday. Instead of continuing to fee upset/guilty/sad that I have no choice but to be in limbo regarding a service or celebration for him, I have come up with an alternative to an ‘in-person’ gathering. The following are some suggestions of things Marty enjoyed doing that you can do this Saturday, on Marty’s Birthday, to honor his memory: *Go fly fishing – or any kind of fishing, for that matter *Go out and play a round of golf *Build something out of wood *Wear your Cougar shirt and tell other fans you see “Go Cougs!” *Work in your yard – paying special attention to your roses *Challenge someone to a game of horseshoes or a game of cribbage *Have a cold beer (preferably dark) *Visit a museum – especially one that feature old cars, airplanes, American History – and take your time studying and learning all that is offered there. *Take a drive to Dry Falls (Just head north on Highway 17) or to Pullman (from any direction), and marvel at the geology of the state of Washington *Sit and visit patiently with someone – listen to them and learn from them *Listen to some music, such as: Bad, Bad Leroy Brown (or any Jim Croce music) Rocky Raccoon (or any Beatles music) Any Beach Boys music Any Creedence Clearwater Revival music Most importantly, just remember what a talented, smart, caring, helpful and find man Marty was. I know how much he loved his family and how much he valued the friendship of each and everyone of you. I hope he realized how much we loved and appreciated him. Lately, I’m finding myself getting past the most recent years when he was sick, and instead focusing on the good memories with ‘the old Marty’. Thank you for your past and continuing support of me. Please keep in touch. Love, Kay OBITUARY Marty passed away in Kennewick on February 22 at the age of 70. He was born in Seattle (Carnation) on July 18, 1949 to Lloyd and Winifred Ottem. In 1954, his family of six moved to eastern Washington and by 1956 they had established a hay farm in Othello. Marty worked on the farm throughout his school years. He graduated from Othello High School in 1967 and then attended WSU where he met his wife, Kay. They graduated and were married in 1971. In 1975, their family grew when daughter Kirsten was born, and in 1978 son Mark was born. Marty's degree from WSU was in Agricultural Economics, which turned out to serve him well in his banking career over the next 35 years. He worked at Seafirst Bank (which became Bank of America) for 17 years, in Dayton, Colville, Lacrosse and Spokane. In 1989, he was recruited by a local Tri Cities bank and the family moved to Kennewick. Over the next 6 years that bank was acquired by two larger banks. In 1995, he was approached by a group of farmers and businessmen who wanted to start a new local bank, and in October of 1996 Columbia Trust Bank opened in Pasco, with Marty serving as President and CEO. During the Columbia Trust years he served on the Board of Directors for both the Washington Bankers Association and the Western Independent Bankers. By 2006 Columbia Trust's growth and success led to them being acquired by another larger bank, and Marty retired at age 56. Over the next 10 years Marty spent his time pursuing his talent for woodworking, working on home and yard projects, becoming a Master Gardner, playing golf and learning to fly fish. He was a loyal Coug! Besides visiting family in Seattle and San Diego, he and Kay took many road trips to various parts of the country to see friends and visit national parks, until a diagnosis of a rare neurological disease kept him close to home during the past 4 years. Marty was a kind and generous man, always willing to help others. He loved his family and he was a wonderful friend to all who knew him. Marty was preceded in death by his parents. He is survived by his wife Kay, daughter Kirsten, son Mark (Diane), grandsons Nate and Parker, brother David (Lou), sister Diane (Jerry), sister Nancy (Bob), sister Gail (Chris), and six nieces and nephews, their spouses/significant others, and their children. Due to the COVID-19 virus, a Celebration of Life for Marty will be held at a later date.

July 15, 2020 Dear Friends and Family, It has been almost 5 moths since Marty passed away. I think it is a blessing that God took him just before Covid-19 hit because it would have been awful not to be able to visit him during his last weeks... View Obituary & Service Information

The family of Martin Philip Ottem created this Life Tributes page to make it easy to share your memories.