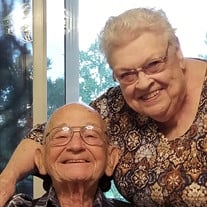 Martha "Myrt" Carol Powers (Humphrey) was born to William and Alta Humphrey February 2nd, 1937 in Stillwater New York. She lived 30,646 days then died on December 30th, 2020 at home. Martha graduated from Stillwater High School in 1954 and worked for Blue Cross in Albany. She was introduced to her future husband, Vern, on a blind date set up by her high school chum, Bessie. Mom always said as soon as dad walked up on the porch, she knew he was "The One!" Evidently Vern felt the same way as they were soon engaged and married in August 1955. They would have been married 66 years this upcoming August. Talk about a match made in Heaven! There was one bone of contention that survived through all their years of marriage. When they were married, Vern and his brother Marion drove from Dayton, Washington to New York. Shortly after the ceremony they loaded up the car and drove from New York to Dayton. On the way, they passed within a few blocks of Niagara Falls, and did not stop! Mom never forgot that and would remind dad at strategic times of his transgression. Mom and dad lived in Dayton for a few months. Upon their arrival in Dayton and being introduced to dad's family, she was told by her new father-in-law, Harry, that he had a relative named Martha, and he did not like her very well. He told mom he liked her, and he just could not bring himself to call her by her name because it reminded him of the relative he did not like, so he nicknamed mom "Myrt." This name stuck. To this day mom was known as "Aunt Myrt" by nearly all of her nieces and nephews. Soon they bought a 32 ft. Spartan trailer and lived on 3rd Street in Pasco, right next to the Pacific Northwest Bell garage where Vern worked. In 1958, they purchased a home and acreage in Burbank Heights, where they lived for the next 57 years. Martha was very active in the community. She worked at the Burbank school as a cook, a librarian, sold Avon, picked grapes for the Blanc family, weighed potato trucks for the Mehlenbachers, was a Cub Scout Den Mother with her neighbor Ruth Lewis and volunteered with some of the phone company wives to do hair for the residents at the Hillcrest Nursing Home in Pasco. She was a talented seamstress and knitter. She helped teach a sewing class at Columbia Basin College and was asked to take a position at the college teaching. She was raising two boys then and wanted to focus on her family first, so she declined the offer. Martha belonged to the Royal Neighbors of America along with her mother-in-law Abbie, sister Sharon and her sisters-in-law Ilene, Naomi, Margie, Zella and Anita. Every year the RNA would hold a formal gathering and Martha would work for months making fancy dresses for many of them to wear. Martha also made sweaters for many people. She would work for hours knitting sweaters with deer, elk, pheasants and even made one for a truck driver with a semi-truck. We remember her working on a sweater, getting it nearly completed and then finding a flaw or a color of yarn she did not like, and ripping out days of work and starting over. She made hundreds of afghans for family and friends, again, spending days and weeks making gifts, never sending one out with a flaw. Many people still benefit from her time, effort and love on a chilly evening! In 1986, she and Vern started Telco Wiring and Repair when they both decided retirement was not for Vern. She and Vern grew the business to where they invited their sons Dusty and Herb on to help. What started in an old bedroom in their home ended up a thriving business that continues on today. Martha loved her family and was proud of her kids, Dusty and Herb and thought the world of their wives, Pam and Gaylene. She really shined though when she became a grandmother and great-grandmother. She was particularly close to her only grand daughter Robin, but thought all of her grandkids, grand daughters-in-law and great grandkids were the end all, be all. She would talk for days about getting a call, picture, or getting to visit with them! Mom's heart was broken when her sweetie, Vern passed away in 2019 just short of their 64th anniversary. She would write notes and letters to dad, filling him in on what was going on. His passing left a hole in her life that could not be filled. Martha was proceeded in death by her parents William and Alta Humphrey and her husband of 65 years, Vern. Martha is survived by her sons Dusty Powers, wife Pam, Son Herb Powers, wife Gaylene, grandchildren Andrew Powers, wife Kara, Robin Powers, Erik Powers, wife Tara and John Thompson. She is also survived by her great grandchildren Preston Powers, Kaitlyn Powers, Hailey Powers and Coleson Powers, and her sisters Sharon Sousa and Marie Waters. She was called Martha, Babe, Myrt, Sis, Mom, Granny and Great Granny, but she will be known for her love and dedication to her family, her generosity and how she cared for people, and especially how she cared for Vern in his final few years. We love you and miss you! P.S. to Dad. Take Mom to Niagara Falls! Services for Martha will be held at a later time when we all can gather unencumbered by current restrictions.

The family of Martha Carol Powers created this Life Tributes page to make it easy to share your memories.

Martha &quot;Myrt&quot; Carol Powers (Humphrey) was born to William and...