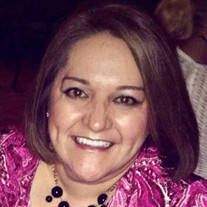 Martha Alicia Cortés Galvez passed away peacefully at home the morning of January 8, 2022, just in time to see her final sunrise, her favorite time of day. A loving mother, wife, and friend, she left behind a legacy of compassion and strength. Martha was the fourth of nine siblings growing up in Guadalajara, Jalisco, Mexico. At age 10, Martha and her family moved to Pasco, Washington, an accomplishment by her parents to give their kids a better life. Martha took this as motivation to always dream big, and never give up. She graduated from Pasco High School in 1989 and then Columbia Basin College Nursing School in 1994. That same year she became a registered nurse at Lourdes Medical Center, before moving to Kadlec Regional Medical Center in 2000. This was the start of her 27-year-long career as a birth center nurse, a career that she felt was more of a calling than a job. During her time as a nurse, she brought over 3,000 lives into this world, advocated for nurses across the state, and impacted everyone she came across. In the fall of 1987, Martha met the love of her life, Israel, whom she married on August 26, 1989. Together they had three beautiful children: Israel, born in 1990; Estevan Javier, born in 1995; and Cassandra Lisette, born in 1998. As a nightshift nurse, she was always awake to watch the sun’s beautiful rays rise, all year long. It quickly became her favorite time of day. Even on her days off, when her children were young, she would still enjoy the tranquility of waking up to a quiet house, spending one-on-one time with her babies, watching the sun as it rose. Being a mother was her greatest joy in life, and her children were her whole world. Martha spent all 51 years of her life living it to the fullest and having a positive outlook on everything, even after receiving devastating news of her terminal illness. She spent her last few months on Earth knocking things off of her bucket list and doing the things she loved, a testament to her go-getter attitude. Her life mission was complete. Martha leaves behind her mother, Marta; her father, Roberto; her husband, Israel; her siblings Aurora, Martin, Maria Guadalupe, Rosa, Socorro, Maria Plutarca, Robert, Juan, and Christopher; her children Israel (Gabby), Estevan, and Cassandra (Salvador). A viewing will be held on Thursday, January 13, 2022, from 5 p.m. to 8 p.m. at Mueller’s Greenlee Funeral Home at 1608 West Court Street, Pasco, Washington. Mass will occur on January 14, 2022, at 11 a.m. at St. Patrick’s Catholic Parish, 1320 West Henry Street, Pasco, Washington. Celebration of Life will follow at 1 p.m. at Salon La Playa, 1512 East Columbia Street, Pasco, Washington.

Martha Alicia Cortés Galvez passed away peacefully at home the morning of January 8, 2022, just in time to see her final sunrise, her favorite time of day. A loving mother, wife, and friend, she left behind a legacy of compassion and strength. Martha... View Obituary & Service Information

The family of Martha Alicia Galvez created this Life Tributes page to make it easy to share your memories.

Martha Alicia Cort&#233;s Galvez passed away peacefully at home the...