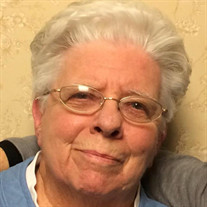 Heaven's choir welcomed an enthusiastic new member when Martha Shelton died on Saturday, November 6, 2021. Born at home 93 years ago, Martha V Jane Eddy was the youngest child of Mina Bell Sagerser Eddy and Leo Franklin Eddy. As a child growing up in Kansas City, Missouri, she enjoyed riding bicycles and roller skating. Music filled the multi-generational home comprised of her parents, four siblings (Charles, Ruth, Jack and Mary), a nephew (Bill) as well as her maternal grandmother, Nancy Jane Roselle. But the Great Depression scattered older siblings and her father Leo F. Eddy westward in search of economic opportunities. In the eighth grade, Martha lived in Indian Springs, Nevada, with her father's sister. Other family members headed to Wenatchee, Washington, where her mother's sisters had relocated. Martha graduated from Wenatchee High School in 1945. Fruit packing was reliable employment during and after World War II and Martha, sister Ruth and their mother all worked in the same warehouse. The family worshipped at Wenatchee's First Christian Church where Martha met Margaret Deaver Shelton. Margaret introduced Martha to her eldest son, Wendell, who had returned from active duty on the European front. Martha and Wendell married on Valentine's Day morning 1947. That afternoon the newlyweds accompanied the family to witness the wedding of sister Ruth and Homer Lillengreen. The two couples honeymooned together in Seattle and remained lifelong friends. The Sheltons moved to the Tri-Cities where Wendell found work in construction and eventually became a master carpenter. Daughter Ruth was born in 1950 and son Donald in 1952. By 1954, Margaret Shelton had joined her son and family, living with or near them until her death. Her mother-in-law's presence enabled Martha to work outside the home as a florist, librarian and secretary. Music filled the air in this new multi-generational home with Margaret on the piano accompanying Martha's clear soprano voice and encouraging the newest budding musician daughter Ruth. Martha and Wendell were involved in Kennewick's First Christian Church for more than 50 years. Martha sang in the choir, taught Sunday School, served as a deaconess, church camp counselor and encouraged her husband and son Donald as they applied their carpentry skills to enhance two different church buildings. Wendell always bragged about the special "bird seed" blend he dished up to nourish his wife's singing. They were joyfully married for nearly 54 years. The Shelton home known as Poverty Hump, was a frequent stop for friends and family from far and wide. Anyone who lingered was offered a bed, meal, or pie, depending on the time of the day or the circumstance. After Wendell's death in 2001 Martha relished encounters with girlfriends, her older sisters, her son and daughter's families and the TOPS group. She was briefly married to fellow choir member Don Allen. Even though she was a tireless caregiver, Don's chronic health condition shortened their time together. Martha was the true heart and soul of the large extended Sagerser/Eddy/Shelton clan and kept track of each one through letters, phone calls and as many family reunions as she could orchestrate. Martha will be remembered for many things, but especially by her four grandsons for her baking skills. She had an overflowing cookie jar always within reach, and baking and frosting cookies with those boys brought her immense joy. She baked apple pies - too many to count - and would take them to new neighbors or to those who were celebrating, ill or discouraged. And nearly any activity at all would bring a song to Martha's lips: silly or serious, show tune or hymn. After being around Martha even briefly, you would find yourself humming for hours afterwards. Martha was the last surviving member of her generation. But her family cherishes her memory: children Donald Shelton of Pasco, Washington; Ruth (Dan) Lemke of Mill City, Oregon; grandsons Chad (Chrissy) Shelton, Ryan (Vanessa) Shelton, Ben (Liesl) Lemke and Jake (Kara) Lemke; three great-grandsons and four great-granddaughters. Her daughter-in-law Nell Shelton of Pasco preceded her in death. Martha's many nieces and nephews and their children are also mourning the loss of this unique woman of faith. A brief but public internment service will be Tuesday, November 16. A private family celebration will be held in 2022. If you wish to honor Martha, the family suggests you donate to a choir in your community. Or one bright sunny morning play your favorite music (especially loudly) and sing along. She'll be listening.

The family of Martha Jane Allen created this Life Tributes page to make it easy to share your memories.