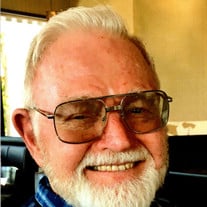 It is with great sadness but tremendous love that we announce the passing of Rusty Morlan, 94. He was born in Lead, South Dakota on May 29, 1927 to Laura and Fred Morlan. His graduation from Lead High School was in 1945 and he was almost immediately drafted into the World War II U.S. Army where he served for two years. He then attended Black Hills College in Spearfish, South Dakota where he played football for four years and graduated in 1951. His first marriage was to Geraldine Yoder in February 1949 and they were the parents of Cynthia, Nanci, and Andrea. His first teaching job was in Fossil, Oregon where he was the coach and taught everything from typing to band. In 1954, he and his family moved to Boardman, Oregon where he taught until 1959 when they moved to Kennewick, Washington. He spent the rest of his teaching career at Park Jr. High/Middle School with retirement in 1981. His second marriage was to Susan Nunley in December 1971 and he became the proud adoptive dad of Sheley and Tracy in 1972. While at Park, he taught Physical Education, coached, was Athletic Director and was honored to have the school annual, the Parkenn, dedicated to him in 1981. Rusty lived the life of good health and exercise that he taught. His greatest joy was helping someone (grandkids) enjoy the things he loved to do! His third marriage was to Leslie Fuller in June 1984 when she and her daughters, Shawn and Lisa, joined his family. Rusty's life was full of outdoor activities that he loved; hunting, hiking, fishing, skiing-he skied until he was 86! He and Leslie were fortunate to be part of the ten Ski Buddies that got together every year for skiing all over the Northwest. Rusty listed some of the majors in his life: 1937 attending the dedication of Mt. Rushmore and seeing FDR there, an Alaskan float trip with his flyfishing buddies, helicopter skiing, catching 13 bonefish in the Bahamas, hiking Glacier Park and staying in the chalets, climbing Mt. St. Helens, Adams and Rainier, elk hunting in the Cowiche, his 80th birthday party at Meadow Springs Country Club, and many hunting, fishing, camping outings in the Tucannon. He mourned the loss of his sisters, Margaret Sullivan and Joyce Pribble and his grandson, Nathan Jones. He is survived by his wife, Leslie Morlan; his daughters Cynthia Simmons, Nanci Morlan Brown (husband Dexter Brown), Andrea Morlan, Sheley Beck, Tracy Aguirre and stepdaughters Shawn Fuller (husband Sean Walbeck) and Lisa Greif, his sister Beverly Horner, brother-in-law and sister-in-law, Buck and Susie Hasselbrink, grandchildren Leona and Eric Drogemuller, Gregory and Andrea Brown, Jillann Morlan Brown, Gabriel Morlan, Amy Sagastegui, Darin Greif, and Troy Greif, as well as 5 great-grandchildren and 2 great-great-grandchildren. At Rusty's request there will be no service. He would appreciate donations to the Oak Creek Elk Feeding Station, 16601 Highway 12 Naches, WA 98937 in his memory or one of the local Hospices. CHEERS, RUSTY, TO A LIFE WELL LIVED!!

It is with great sadness but tremendous love that we announce the passing of Rusty Morlan, 94. He was born in Lead, South Dakota on May 29, 1927 to Laura and Fred Morlan. His graduation from Lead High School was in 1945 and he was almost immediately... View Obituary & Service Information

The family of Marion "Rusty" F Morlan created this Life Tributes page to make it easy to share your memories.

It is with great sadness but tremendous love that we announce...