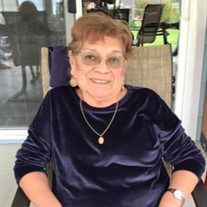 Maria Dolores Rodriguez is survived by her loving husband of 65 years, Celestino Rodriguez. She is also survived by her four children Enrique, David, Leroy, and Elisa (Husband, Cesar) and her four grandchildren Alberto, Selena, Suzette (husband, Willy), Ashley, and great grandson, Javi. She is also survived by two of her 11 siblings, Francisco and Consuelo along with numerous Nieces and Nephews. Maria was born to Lazaro and Antonia Sanchez on April 8, 1938 in Uvalde, Texas. She was raised in Eagle Pass and migrated back and forth from Eagle Pass, TX to Toppenish, WA. She met the love of her life, Celestino, in 1952 at Golding Farms in Toppenish. They married on October 1st, 1955 in Toppenish. Maria and Celestino started their family in 1959 when their first son was born, Enrique. They later had 2 more sons, David and Leroy and one daughter, Elisa. Maria passed on October 27, 2020 surrounded by family. She is preceded in death by her parents Lazaro and Antonia Sanchez, as well as her siblings Jose, Maria, Jesus, Dolores, Juanita, Lazaro, Antonia, Maria, Gloria, and Juanita (Tina). Maria was a loving wife, mother, grandmother, and sister. Many loved and knew her as Marikina. ~Forever in our hearts~

The family of Maria Dolores Rodriguez created this Life Tributes page to make it easy to share your memories.

Maria Dolores Rodriguez is survived by her loving husband of...