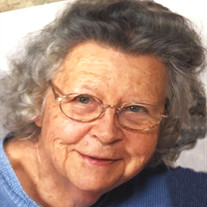 Margarite Louise Personett Gale was born July 15, 1924 in Plymouth, Indiana, the first child of Arista and Kathrine Wynn Personett. Siblings are Richard (Betty), LeRoy, Lavera, Francis ((Marian), Dean (Norma), Jean (Bob), and Glen (Erma). When Margarite was 9-years-old her family moved to Kennewick, Washington. She started 4th grade that year. She attended Kennewick High School and graduated in 1942. Margarite attended a Business University in Spokane in 1942 but decided she didn't like that so she got a job in Big Pasco in December of 1942. She worked for the Army Engineers, first as a messenger, and soon became a clerk in Warehouse 8, where they shipped and received orders to different Army bases. She worked there until the base closed in June of 1947. In the spring of 1942, she first met her sweetheart, Jesse Gale, and he joined the Navy later that summer. They corresponded throughout the war and Jesse was discharged January 2, 1946. Jesse and Margarite were married March 16th, 1946. After their honeymoon, they lived in an apartment in Pasco for six months while looking for a place to buy. They found their perfect place with 2 ½ acres on Metaline Avenue and exactly 60 years later they moved into their new home. In 1962, Margarite was baptized as a member of The Church of Jesus Christ of Latter-day Saints. She served as a Cub Scout leader for 10 years until her sons were out of cub scouts. She also served as a secretary for the youth and women's organizations. She is survived by brother, Dean (Norma); sisters-in-law, Betty and Marian; five children, Roy (Joan) Lehi, Utah, Gloria, Kennewick, Donald (Glenna) Kennewick, Mary (Scott) Garland, Utah, Larry (Carren), Athol, ID; 25 grandchildren; 83 great-grandchildren; and 1 great-great-grandson. Margarite passed away Sunday October 24, 2021 surrounded by her family. A viewing will be held Friday, October 29th from 6-8:00 pm at Mueller's Tri-Cities Funeral Home in Kennewick. Saturday October 30th will be a 12:00 pm viewing at the Church of Jesus Christ of Latter-day Saints Chapel, 515 South Union Street with the funeral following at 1:00 p.m. Interment will follow at Desert Lawn Memorial Park. Margarite is preceded in death by her husband, Jesse Gale; parents, A. B. and Kathrine; brothers, LeRoy, Francis, Glen, Richard; Sisters, Jean and LaVera, and 2 infant great-grandsons. We would also like to thank our friends and family, the healthcare workers, ward members and leaders, Desert Wind Gardens, and Chaplaincy Hospice for all their heartfelt support.

The family of Margarite Louise Gale created this Life Tributes page to make it easy to share your memories.