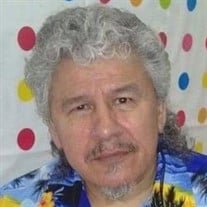 Manuel Jr. was born to Manuel and Toribia Guajardo on September 11, 1952 in Edinburg, TX, the third oldest of six brothers and three sisters. In April of 1960, seven-year-old Manuel accompanied his parents to his new home in Washington State. Manuel attended Pasco schools and would have graduated with the great Pasco High School class of 1971 had he not explored the more fun and exciting social side of a high school education. He did value the importance of an education and later completed his GED. Manuel worked hard his entire life until multiple injuries slowed him down. He was a car salesman at Russ Dean Ford, worked at Hanford, Boise Cascade and numerous other places. His last place of employment was at Columbia Crest Winery. One could say Manuel was a social person. His golden toothpick got lots of attention. He had many friends. All were special and they all share many stories. Family gatherings were important to Manuel. He treated everyone with respect and affection. Manuel had a knack for remembering what your last conversations were about and would follow up to see how you were doing. He loved his family and there was nothing he wouldn’t do for anyone in need. He enjoyed making everyone laugh. In 1993 Manuel met Trish “Love is patient, love is kind. Manuel met the love of his life, Trish, 28 years ago, at the Village Tavern, in Kennewick. Both Manuel and Trish raised her children, which he loved and adored very much. They were all his kids. He spent most of his time with Trisha going on car rides, spending time with their grandchildren, reading together or working and planting in the yard. They would often go shopping and Manuel would make sure to add to his collections of: pens, flashlights, knives, any old DVDs or CDs, or hats. He also collected bottles of expensive wines, which he sometimes shared with his brothers. He enjoyed all sports, but football was his favorite, especially the Seahawks. When he wasn’t working the last few years, he spent time working on his Volkswagen cars. This led him all the way to California to get his red Volkswagen Beetle. He would get dressed up especially for Trisha – just to put a smile on her face. They liked to stay home and be in each other’s company, watching movies until they would fall asleep. Most of all, he loved his entire family. He was a caring person and will never be forgotten. Love always protects, always trusts, always hopes, always perseveres – this is the love that Manuel shared with anyone who knew him. Trish would call him, “My sweet love,” and she loved him very much.” Manuel was preceded in death by his parents, Manuel (1993) and Toribia (1997) Guajardo and his youngest brother Leo (2019). He is survived by Patricia Kleyn, their six children: Angela Rojas-Ortega, Gloria Bond (Jason Blanchard), Brandon M. Ullom (Amy), Katie Gordon (Ben), Faith Cullens (Justin), Christiaan Ullom (Janessa Shandy); 14 grandchildren and 2 great-grandchildren; Brothers Robert, Mike (Laura), Vicente, and Eliazar; sisters Minerva Maloy (Scott), Dora Warwick (William), Carolina Davis, ex brother-in-law Leon Davis Sr., Nieces/Nephews: Cristina/Ian Carey, Marisa/Jack Anderson, William Warwick, April/Heath Wade, Ipolito/Kenzie Maloy, Leon Davis Jr., Maisie Davis, Shalon MacNeil, Ivy/Ron Anderson and 17 great nephews and nieces. His fun-loving persona will be greatly missed. He was much loved. Express your thoughts and memories on the online Guest Book at www.muellersfuneralhomes.com. In lieu of flowers, donations can be made in Manuel’s honor to The ARC of Tri-Cities or the Alzheimer’s Association.

Manuel Jr. was born to Manuel and Toribia Guajardo on September 11, 1952 in Edinburg, TX, the third oldest of six brothers and three sisters. In April of 1960, seven-year-old Manuel accompanied his parents to his new home in Washington State.... View Obituary & Service Information

The family of Manuel Guajardo created this Life Tributes page to make it easy to share your memories.

Manuel Jr. was born to Manuel and Toribia Guajardo on September...