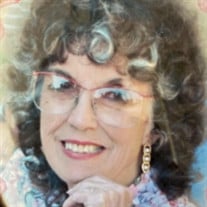 Louisa Elizabeth Stallings went to be with her Lord and Savior, Jesus Christ on May 4, 2020. While our hearts are heavy we know that Heaven was the scene of a joyous reunion with her husband Carl "Wayford", sons Ricky and Chester, son-in-laws Bill and Dwight, granddaughters Cynthia (Cynde), Karen, Kaziah, Kristina, five brothers, two sisters and so many more family and friends who were waiting for her. Louisa was born in Colchester, Illinois on September 2, 1925, the fourth of Carl and Beatrice Nelson's 12 children. From her childhood she was instilled with the values of family, frugality and honesty. At sixteen she left home on a Greyhound bus to live with her sister in Oregon and make money working in the fields. It was in the Oregon strawberry fields she got to know the boy that became the love of her life, Carl "Wayford" Stallings. They married in 1943 and had two children within the first three years. Mama wanted a large family and five years later another daughter was born, followed quickly by two more children. In 1959 they relocated to the Tri-Cities where they were surprised by a sixth child. After the birth of their sixth child Carl and Louisa became Christians and charter members of Riverview Baptist in Pasco. Wayford and Louisa were true partners and rarely were apart until his death after nearly 63 years of marriage. Together they built three houses, but it was Mama who made the houses into homes. Her children loved knowing she was always there, eager to talk and listen. She sewed all her children's clothes and created beautiful quilts which are still treasured by her family. Louisa's strength and faith helped her through the deaths of her two sons and husband and her faith comforts those of us who miss her. She is survived by her daughters Dianne Brownson, Susan Dobson, Jeannie Collin, Lisa Zaccaria, son-in-laws Scott Collin and Jason Zaccaria and sisters Izella, Rosalie, Beatrice and Linda. She was a beloved grandma and leaves a legacy of 13 living grandchildren, 23 great-grandchildren and 17 great-great grandchildren. We look forward to the day we see her again. Arrangements through Mueller's Greenlee Funeral Home, Pasco. Graveside Service for immediate family Saturday at Riverview Heights Cemetery, Kennewick.

Louisa Elizabeth Stallings went to be with her Lord and Savior, Jesus Christ on May 4, 2020. While our hearts are heavy we know that Heaven was the scene of a joyous reunion with her husband Carl "Wayford", sons Ricky and Chester, son-in-laws... View Obituary & Service Information

The family of Louisa Elizabeth Stallings created this Life Tributes page to make it easy to share your memories.

Louisa Elizabeth Stallings went to be with her Lord and Savior,...