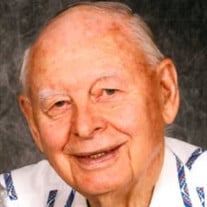 Louis (Louie) William Meissner Louis W. Meissner quietly left this earth and was received in our Lord's embrace on Friday, June 18, 2021. Louie was born in El Reno, OK, on May 24, 1928 to Louis and Mary Meissner. The family relocated to eastern Oregon in 1940 and settled on a farm in Umapine, OR. When Louie's father died in 1945, he took over the family farm while completing high school and graduated as valedictorian in 1946. In the spring of 1954, Louie met Violet Nielsen from Portland OR, and they were married six months later between deer and elk hunting seasons. He was a devoted husband to Violet for over 66 years and a wonderful father to their three daughters. Louie was a self-made man and a true entrepreneur. After taking over the family farm, he started a pesticide application business in 1954, turning it into Umapine Chemical Applicators in 1956 with partner Tom Tucholke. By 1966, the company expanded to form Umapine Chemicals Inc. in Eltopia, WA. In 1969, Louie became sole owner of the corporation and moved his family to Kennewick, WA. The company was sold to Wilbur-Ellis Co. in 1980, and Louie continued to work for them as manager for special projects until 1999. He also owned several tire stores and a building company. Louie was highly regarded in Washington's agriculture and business community. He was appointed to the Washington Governor's Pesticide Advisory Board from 1983-1996 and served as chair for 11 years., as well as the Washington Governor's Council on Agriculture and the Environment from 1994-1998. Louie was also a member of the Association of Washington Business (AWB) for 20 years, President of the Tri-Cities Credit Association, and President of the Pasco Chamber of Commerce. In 2005, the Chamber recognized his lifelong work in agriculture by inducting him into the Mid-Columbia Ag Hall of Fame. Among Louie's other passions were hunting and fishing. He hunted throughout the northwestern US and Alaska, as well as Canada, Africa, and Spain. He took pride in teaching his daughters and grandchildren how to shoot and hunt, and he supported the hunting community through his active involvement in Safari Club International and the National Rifle Association. Louie was a lifelong member of the Presbyterian Church. He served as an Elder, Deacon, Sunday School Superintendent, delegate to the National Presbytery, and member of the Trail Seekers of Central Washington working with at-risk boys. Louie truly loved his Lord and lived his life as an example for all to see. Above all, Louie loved spending time with his family and lifelong friends. He was never short on stories to tell and could carry on a conversation with just about anyone who was willing to listen. His grandchildren all have fond memories of spending Christmases in Grandpa's trophy room, going on fishing trips during the summers, and spending time at hunting camp. Louie is survived by his wife, Violet Meissner; daughters Chris (Gary) Carpenter, Lorraine (Tom) Calihan, and Billie (Dan) Mauss; grandchildren Ashley, Kristin, Courtney, Brooklynn, Louis, and Craig; and 7 great-grandchildren. He is also survived by a special nephew, Don (Sharon) Dunn, and their children Melissa, Emily, and Andrew; close family friend James (Victoria) Tobery and their sons Jacob and Jordan; and numerous nieces and nephews. He was preceded in death by parents Louis and Mary Meissner, brother David Dunn, and sister Frances Dunn. Please join us in celebrating Louie's life on July 9th. Following a small graveside service for the family, a Celebration of Life will be held at 2:00 at Kennewick First Presbyterian Church. In lieu of flowers, donations can be made to the Trail Seekers of Central Washington through Kennewick First Presbyterian Church (509-582-9537) or at . The family invites you to sign their online guest book at www.muellersfuneralhomes.com.

Louis (Louie) William Meissner Louis W. Meissner quietly left this earth and was received in our Lord's embrace on Friday, June 18, 2021. Louie was born in El Reno, OK, on May 24, 1928 to Louis and Mary Meissner. The family relocated to eastern... View Obituary & Service Information

The family of Louis William Meissner created this Life Tributes page to make it easy to share your memories.