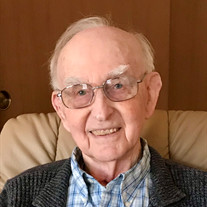 On June 13, 2020, longtime Connell, Washington resident, Lloyd Roy Seuell, passed away at the age of 94. Lloyd was born on October 14, 1925, in Joplin, Missouri. Following school and service in the US Army, Lloyd returned to farming in Caldwell, Idaho where he met and married his "Betts". Lloyd and Betty were married for 65 years before her passing in 2016. In 1955, Lloyd and Betty moved to Connell, Washington to co-own and manage Seuell's Implement, a John Deere franchise for almost 20 years. After retiring, Lloyd's interest in the dealer side of the car business led to purchasing and successfully running Idaho Auto Auction for many years. Active in the Connell community, Lloyd served on City Council, was a volunteer firefighter/EMT on the Connell Fire Department and a member of the Jaycees for many years. Some of Lloyd's hobbies and interests included camping, fishing, bowling and wine tasting. His social nature found him frequently engaged in conversation and activities, especially those involving his family. In 1998, Lloyd and Betty retired to Kennewick, Washington and continued to enjoy wintering in Arizona and spending time with their grandkids and great-grandchildren. Lloyd was a loving father and family man, which was clearly demonstrated through Lloyd's devotion to Betty's care for many years following her stroke. Lloyd leaves behind son Alan (Diana) of Pasco, daughter Vicki Sutton (Mike) of Renton, WA, four grandchildren - Cara, Erin, Jared and Jennifer, and seven great-grandchildren - Adah, Joshua, Micah, Christopher, Hattie, Elisabeth and Harper. At Lloyd's request there will be no services and the family asks that in lieu of flowers, remembrances be directed to 2nd Harvest in Kennewick.

On June 13, 2020, longtime Connell, Washington resident, Lloyd Roy Seuell, passed away at the age of 94. Lloyd was born on October 14, 1925, in Joplin, Missouri. Following school and service in the US Army, Lloyd returned to farming in Caldwell,... View Obituary & Service Information

The family of Lloyd Roy Seuell created this Life Tributes page to make it easy to share your memories.