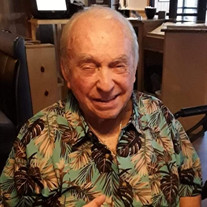 Card Shark Legend and "Master Beadsman" Lionel Dale Sams passed away at 91 years of age on Monday, April 18th in Richland, WA. He was the third born child to Gilbert and Martha (Dockter) Sams in Walla Walla, WA on September 20th, 1930. He graduated from Walla Walla High School in 1948 and was drafted into the Army in 1951. After basic training in Camp Roberts, California he deployed in support of the Korean War. He served the United States for over two decades with distinction and received 3 Purple Hearts. On September 25th, 1955 he married the woman he knew that he could not live without, Bonnie Jean Strampher, whom he met at a local roller-skating rink. They had three children together and eventually moved to Kennewick, WA in 1964 where many fond memories were made, especially in the backyard pool. Once they retired in 1995, they began their snow bird trips between Washington and Arizona and eventually expanded their trips to the back roads of Europe, Hong Kong, China and Alaska where they made more new friends that they could count. He was the proud designer of a product he coined "The Key Keeper" and over the years personally handed out and sent over 10,000 which ended up in 7 countries, 19 states and 47 cities. When he wasn't generously crafting he was "hustling the family" playing cards and board games. His most cherished moments were with family and close friends up at the family lake house outside of Medical Lake, WA that was purchased in 1978. He is survived by wife Bonnie Sams, Daughter Kristi Tompkins, Sons Douglas and Curtis (Lori) Sams, Grandchildren Heather Van Nauker, Tyler Tompkins, Denise Hostynek, Tiffany Tompkins, Ryan Sams, Derek Sams, Amy Mortensen and Joshua Sams, as well as 6 great-grandsons. One of his favorite mottoes was "We Can Calm this Angry Planet One Smile at a Time". Funeral services will be held on Tuesday, April 26th at 11:00 AM at Mueller's Tri-Cities Funeral Home at 1401 S. Union St. in Kennewick, WA. The burial will be immediately after at Desert Lawn Memorial Park.

The family of Lionel Dale Sams created this Life Tributes page to make it easy to share your memories.