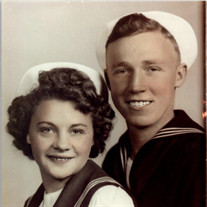 Born January 18, 1924 and passed away peacefully at home on March 28, 2022. He was born in Pocatello, ID to Archie and Theone Pulley Gray. He was one of 10 children and grew up in Shelley, ID. He married Virginia Cook on November 5, 1943 in the Salt Lake Temple. Virginia preceded him in death in 2008. All of his brothers and sisters preceded him in death. He is survived by their 6 children: Judy and Rex Bendixsen (Kennewick, WA), Sonja and Evan Roberts (Richland, WA), Rulon and Colleen Gray (Othello, WA), Boyd and Paula Gray (Pasco, WA), Kevin and Susie Gray (Eltopia, WA) and Nanette and Mike Blair (Othello, WA). He is also survived by 36 grandchildren, 100 great grandchildren and 9 great-great grandchildren. He is a WWII veteran having served in the Coast Guard from January 1, 1944 to January 1, 1946 as a radar operator. His ship, USS LST 168, served in 8 major Asiatic - Pacific Campaigns earning eight battle stars for WWII service. He said frequently “I’m proud to have served, as I really love America.” After World War II he lived in Osgood, ID farming for U & I Sugar Company. He homesteaded near Basin City, WA in 1963 on the Wind Erosion Farm in Block 20. He is a High Priest in the Church of Jesus Christ of Latter-Day Saints serving in many teaching callings and as a ward clerk. Lester and Virginia served missions for the church in Pasco Genealogy Library, doing temple work in the Seattle Temple, and serving in the Church Employment Center in Kennewick, WA. He was employed by Lamb Weston (20 years) in Connell, WA in Waste Treatment working his way up to Supervisor of Waste Treatment. His pride and joy was raising flowers in his yard and taking beautiful floral arrangements to church on Sunday. He especially enjoyed attending school functions on veteran’s day with his great-grandchildren. Viewing at Greenlee Funeral home in Pasco on Court Street at 6:30 to 8pm April 8, Graveside service at Connell Mountain View Cemetery at 11am on April 9 with a memorial service at Basin City Ward at 1pm on April 9.

Born January 18, 1924 and passed away peacefully at home on March 28, 2022. He was born in Pocatello, ID to Archie and Theone Pulley Gray. He was one of 10 children and grew up in Shelley, ID. He married Virginia Cook on November 5, 1943 in... View Obituary & Service Information

The family of Lester Earl Gray created this Life Tributes page to make it easy to share your memories.