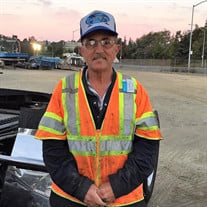 Leonard Lee Fischer, affectionately known as "Scale Runner" by fellow long haul truckers, went home to be with the Lord on March 19, 2020 after a long but courageous battle with illness. Lee was born in Huron, South Dakota on December 20, 1948 to Leonard Chris and Velma Fischer. He spent his early years working on the family farm and involved in 4H/FFA. After high school, he joined the Navy and served two tours in Vietnam as a Boatswain's mate second class. He took much pride in being a member of the Armed Forces and serving his country. After Vietnam, he relocated to Washington State where he began his career as a long haul truck driver, culminating in a 40-year career with Lampson International, retiring in 2016. Early on in his career he met Sandee, the love of his life, in Pasco, WA in 1975. They married the following year which led them on a 43-year journey filled with love and adventure. In 1986, they welcomed their daughter Lindsee, whom they deemed their miracle baby. She was his pride and joy, forever Daddy's little girl and his greatest adventure. Another one of his adventures was becoming a champion cross-country snowmobiler. He displayed his trophies proudly. Lee also enjoyed camping, fishing and any opportunity to be with his family. If he wasn't driving a Lampson truck you could find him at the Tri-City Water Follies, rooting for the Mariners and the Seahawks, or volunteering his time in a local parade. Some of his treasured accomplishments included his role in the transportation of the 9/11 monument to the Tri-Cities and his active participation with the sub moves at the Hanford site. That said, nothing was more treasured to him than the arrival of his granddaughter Bralyn in 2015. From the moment she was born, their bond was unbreakable. She became the light of his life, Papa's little princess, filling his hours with so much joy and excitement. Lee will be remembered for his kind heart, generosity, hard work and forgiving nature. He loved to talk to people and always had a story to share. He was the first to volunteer when someone needed help and the devotion, he had to his family was unshakeable. He is survived by his loving wife, Sandee, their daughter Lindsee Graves, granddaughter Bralyn Graves, stepmother Geneva Fischer Goss, brothers Roger Fischer (Sally), Stanley Fischer, In-laws Joe and Kelly Burrell, and numerous cousins, nieces and nephews. The family wishes to extend our sincere thanks to the staff at Seattle Cancer Care Alliance, University of Washington, and the many healthcare professionals both in Seattle and Tri-Cities who assisted in Lee's care. A memorial will be held at a later date once it is safe for a large gathering. We expect many will want to come and say goodbye.

Leonard Lee Fischer, affectionately known as "Scale Runner" by fellow long haul truckers, went home to be with the Lord on March 19, 2020 after a long but courageous battle with illness. Lee was born in Huron, South Dakota on December 20, 1948... View Obituary & Service Information

The family of Leonard Lee Fischer created this Life Tributes page to make it easy to share your memories.