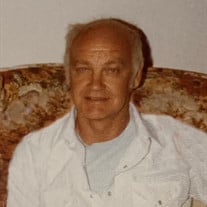 Lee Smith went to be with his Lord and Savior on Monday, November 8th 2021, at his home, surrounded by his loving family. He had a smile on his face as he met Jesus. Lee was born in Bend, Oregon on March 25, 1930 to Pearl Elizabeth (Calendar) and Owen Clyde Smith. His siblings were Ruth, Lilas, Betty, Clyde, and JoAnne. Lee moved to Kennewick in 1947 and lived with his sister Lilas. He began working at the Hanford site in 1947 or 1948. At that time he moved to Richland and lived in the Hanford barracks. Lee met the love of his life, Wilma Jean Roberts, in 1950 at the Pollyanna on Washington Street in Kennewick. They married September 29, 1951. They celebrated 70 years together this past September. Their first child, Debbie, was born in 1952. Another daughter Barbara (Bobbie), was born in 1954, and a third daughter Connie, in 1957. Lee worked for J.A. Jones at the Hanford Site, and later worked for KID, using dynamite and a jackhammer, to make canals for irrigation water. He also worked on several dams, including Lower Monumental, Ice Harbor and McNary, and Pacific Kenyon making animal feed. When Dad came home after work, he many times had a story for us around the dinner table. Dad was a hard worker and he instilled a strong work ethic in all 3 of his daughters. Lee attended South Hills Church for over 20 years. He was baptized in the Columbia River. He had a big heart for helping people and would always find time for his family. Lee built his first home in approximately 1953, his second home in 1957, and a third home in 1980. In 2000, at the age of 70, he built his fourth and final home. He is survived by his wife Wilma and his three daughters, Debbie (Gene) Thompson, Barb (Craig) Littrell, and Connie (Warren) Smith, 8 grandchildren, 25 great grandchildren and 3 great-great grandchildren. Also by his sister JoAnne Parsons and many nieces and nephews. We would like to mention our appreciation of Dutch Bros on Clearwater, for treating Dad with such kindness and all of the "Lee's Specials". A viewing will be held Monday, November 15, 2021 from 5-8PM at Mueller's Tri-Cities Funeral Home, 1401 S. Union Street Kennewick, WA 99338. A Memorial Service will be held Wednesday, November 17, 2021 at 2PM at South Hills Church, 3700 W 27th Ave, Kennewick, WA 99337.

Lee Smith went to be with his Lord and Savior on Monday, November 8th 2021, at his home, surrounded by his loving family. He had a smile on his face as he met Jesus. Lee was born in Bend, Oregon on March 25, 1930 to Pearl Elizabeth (Calendar)... View Obituary & Service Information

The family of Lee Edward Smith created this Life Tributes page to make it easy to share your memories.

Lee Smith went to be with his Lord and Savior on Monday, November...