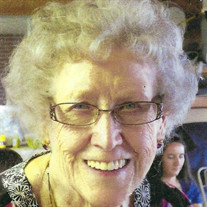 Shirlene was born in Connell, Washington on January 30, 1934. She was called away by her Lord and Savior, Jesus Christ, on January 5, 2020 at the age of 85 years and 11 months. She and her twin brother Sam were born on the west side of Connell in a home that is still owned and occupied by a member of the Harper family. Shirlene grew to adulthood in Connell, graduating from Connell High School with the class of 1952. In high school she was involved in many activities. She was a cheerleader; she was active in various singing groups and she played cymbals for the band. She loved music. She regularly attended church and Sunday school in her childhood and youth. She continued to have a strong faith in God right up to the end. After graduating high school, Shirlene went to beauty school and became a beautician by which occupation she supported herself and eventually three small daughters. Shirlene was one of eleven children born to Charles Albert Harper and Florence Dee Love Harper. She was preceded in death by her parents, her son, Geoffrey, her oldest daughter, Heather, and nine of her siblings. At the time of her passing only she and her younger brother, Larry (Tuck) Harper, remained. Shirlene was married in 1957 to Jay Floyd Kenney. From this union, four children were born. The first, Geoffrey lived only a few hours. She had three daughters, Heather, born in January of 1961, Ami, born in January 1962 and Gretchen born in September of 1963. Shirlene's marriage to Mr. Kenney ended in divorce shortly after Gretchen was born and Shirlene became a single mother of three young children. She remained a single mother for approximately six years. In 1970, she met and married John Mason who brought 4 more children into the picture. She now had 7 children. In addition to her husband, John, Shirlene is survived by four daughters and two sons. They are Perry Mason (Barbara), Ami Richins (Larry), Ronald Mason (Lorraine), Gretchen Krug (Ron), Vickey Chapen (Austin), Karen McNiven, and her baby brother, Larry (Tuck). She is also survived by many grandchildren, great grandchildren, nieces, nephews, cousins and dear friends. Shirlene was many things. First and foremost, she was a loving and kind wife, mother, grandmother, great grandmother and friend. Shirlene was an ardent crafter, she loved decorating things. Her home, her church, her yard were all palettes upon which she performs her feats of magic. It has been said that you can't make a silk purse from a pig's ear. Not true. She could. Making flower was one of her favorite things to do. She was known far and wide for her sugar and molasses cookies. If she didn't have a reason to give a party she could make up a reason. She loved family gatherings. She loved going to church. Her faith in God never wavered. The last Saturday before her passing she asked, "Are we going to church tomorrow?" Many memories are shared by her children, grandchildren and others of going camping and taking long family trips. She and John along with their children and grandchildren have toured extensively in the western United States and in Canada. One of her favorite destinations was the GOODWILL store. She would spend many hours in a Goodwill store finding what she referred to as "my treasures". She might find something for herself, a friend, her children, grandchildren and great grandchildren. Her legacy will live on. She has imparted her love, her faith and her persistence to her children and grandchildren. One of the greatest things about Shirlene was that even after high school, she continued to be a cheerleader. She cheered her kids, she encouraged her husband when he would be wanting to give up and quit. She never allowed that. She was a coach, a teacher and mentor. She loved to give. She would spend many long hard hours making jams, jellies and other things that she would put in her Christmas baskets that she gave to family, friends, neighbors and even people she didn't know. Along with her jams and jellies she always made several kinds of candies to be included in her Christmas basket. Haystacks was a perennial favorite for many. Shirlene was far too talented to ever be totally explained. She could see the good in everyone with whom she came into contact. We were all blessed to have known her, to have loved and be loved by her. God has taken a special angel home.

Shirlene was born in Connell, Washington on January 30, 1934. She was called away by her Lord and Savior, Jesus Christ, on January 5, 2020 at the age of 85 years and 11 months. She and her twin brother Sam were born on the west side of Connell... View Obituary & Service Information

The family of Leah Shirlene Harper Mason created this Life Tributes page to make it easy to share your memories.