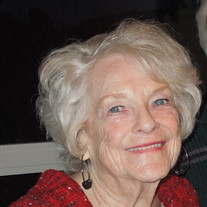 Laverne (Vernie) Alice Knoepfel, age 84, passed away from congestive heart failure at home with her family by her side on May 22, 2020. She was born July 12, 1935 in Seattle, Washington to Vernon and Violet Reed. Her early childhood was spent in the Machias/Blackmans Lake area of Snohomish, WA. Her family moved to Everett when Vernie was 13, and she graduated from Everett High School in 1953. She attended WSU from 1953-1955 and was a lifelong "cougar fan." She kept in close touch with her college friends from Regents Dorm and continued to get together for "reunions" throughout the years. Just last year, they all met at Ocean Shores, WA and enjoyed a great time at the beach. After leaving WSU in 1955, she went to work as a secretary for Snohomish County Title Insurance Company in Everett, WA. From 1957 until 1965 Vernie worked as the Secretary to the Vice President of the law department of Washington Title Insurance Company in Seattle. She loved this job and all the excitement of the city. She often talked of her working days in Seattle and how she enjoyed dressing up, wearing high heels, and the hustle and bustle of the city. She met her husband Don and the love of her life at a company picnic. They were married on June 16, 1962 at the First Congregational Church in Everett WA and would have celebrated their 58th wedding anniversary next month. Vernie and Don moved to Moses Lake, Washington in 1968 when Don went to work for Title Guarantee Company of Grant County. They became active in Moses Lake Country Club and Vernie learned to play golf. She was also active in Lady Lions, and Merry Mixers Dance Club. Throughout their married life, Vernie loved to dance and they were usually the first couple on the dance floor. In 1972, Vernie and Don moved to Tri-Cities when Don took a position as Vice President and Manager of Land Title Company. Vernie soon made life-long friends through Tri-Cities County Club where they were active members for 45+ years. Vernie was also a member of various women's organizations over the years including Federated Women's Club, Red Hats and Seasons. In 1981, Vernie went to work for UNC/Westinghouse where she worked as a secretary until she retired in 1997, coincidentally the same year her granddaughter Maren was born which allowed her to spend a lot of time with her new granddaughter. Vernie was a loving and dedicated mother first and foremost. She treasured all her family and the many nieces and nephews who thought she was "one in a million." She cherished her role as Grandma and could not have been more proud of her two grandchildren, Maren and Reed. She embraced every moment with her family, especially with her husband Don. They visited the Hawaiian Islands several times, traveled to Europe with their daughter and son-in-law, and made many car trips visiting throughout the United States. Vernie often said she could make the trip over Snoqualmie Pass with "her eyes closed" she made it so many times to see her daughter and grandchildren. Vernie was also an avid reader, always trading books with her many friends, a wonderful hostess and cook who enjoyed entertaining at her home and trying new recipes. She developed a large, sought after recipe book over the years, and was happy to share her recipes. She set beautiful tables and took every opportunity to use her "good dishes." Holiday dinners and traditions were important to Vernie. Laverne Alice Knoepfel is preceded in death by brother Donny, killed in 1944 in the south pacific; brothers Wally and his wife (Mary); Lyle and his wife (Lee); and Jerry; sister Evelyln and her husband's Fred Morgan and Gordon Darling. She is survived by her devoted husband, Donald, cherished daughter Lisa and son-in-law (Kevin) Culbert, grandchildren, Maren Sorine Culbert and Reed Wilson Culbert; brother and his wife, Jim and (Bonnie) Reed and sister-in-law and her husband, Patricia and (Robert) Ramage and many nieces and nephews. If you would like to make a donation in Vernie's memory, please consider her favorite charity; Seattle Children's Hospital Heart Center Commemorative Giving, PO Box 5371 Seattle, WA 98145, or Chaplaincy Hospice Care 1480 Fowler ST, Richland, WA 99352. Local arrangements were made through Mueller's funeral home and Vernie will be buried in Everett, WA at Evergreen Cemetery. A Celebration of Life will be held this summer when Covid-19 restrictions are lifted.

Laverne (Vernie) Alice Knoepfel, age 84, passed away from congestive heart failure at home with her family by her side on May 22, 2020. She was born July 12, 1935 in Seattle, Washington to Vernon and Violet Reed. Her early childhood was spent... View Obituary & Service Information

The family of Laverne Alice Knoepfel created this Life Tributes page to make it easy to share your memories.