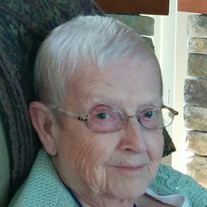 Laura E. “Betty” Johnson June 16, 1929 – February 21, 2021 Pasco, Washington Laura E. (Betty) Johnson passed away on February 21, 2021 at the age of 91 in Spokane, Washington. Betty was born to Thomas and Laura McDonald on June 16, 1929 in Bellingham, Washington. Betty was a part of a large family made up of numerous aunts and cousins primarily located in and around the Bellingham area. She worked as a medical secretary at St. Joseph’s Hospital in Bellingham and earned a Bachelor’s Degree in Psychology at Western Washington University. Later, while working at Boeing, she met her future husband, Harold. They were married in June of 1967. Harold went on assignment to New Orleans and Florida and took her along as a honeymoon. Betty grabbed the opportunity and swam in the Atlantic. After returning to Seattle the following year, the couple welcomed their first child, Jeffrey. To pursue a new career opportunity, the family relocated from Seattle to Richland, Washington. In 1971, they welcomed a daughter, Victoria. Once the children were old enough to attend school, Betty worked as a teaching assistant at Columbia Basin College in Richland, where she enjoyed sharing her years of experience as a medical secretary with the students. Betty and Harold enjoyed taking their children on camping trips all over the Pacific Northwest, in particular, to Lake Chelan, Mount Rainier, and many lighthouses along the Oregon and Washington Coasts. One of Betty’s favorite past times was opera, and although Betty had a beautiful singing voice, after her marriage she never sang again. Her favorite opera singers were Joan Sutherland and Luciano Pavarotti; a highlight for her was seeing Pavarotti live in concert in Seattle. In addition, Betty was an avid animal lover, instilling that love into both her children. After retirement, Betty and Harold traveled to Alaska and many destinations in the continental U.S. They also enjoyed socializing and participating in activities at local Senior Centers. Betty is survived by her husband of nearly 54 years, Harold of Pasco Washington, son Jeff of Vancouver, WA, and daughter Vickie (Kirt) Clem of Pasco, Washington. She is also survived by her sister-in-law, Mickey Jones of Vancouver, Washington. She was preceded in death by her parents and many aunts and cousins. A private memorial service will be held on Monday, March 1, 2021.

The family of Laura "Betty" Elizabeth Johnson created this Life Tributes page to make it easy to share your memories.