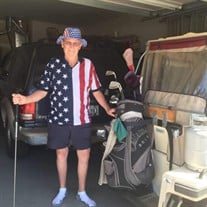 Lawrence “Larry” Joseph Shinker, son of George and Cora Shinker as born November 12, 1940, in Dalton, Nebraska. The family moved to Pasco, WA 1951. He attended St. Patrick's School through 8th grade and graduated from Pasco High School in 1959. Onto college at Eastern Washington University for a bit before being drafted into the military, where he spent a few years in the United States Army. After his return he went to work for Hanford as a Lab Technician. He returned to college attending Central Washington University and graduated with a BA in 1976. Eventually he worked into manager status and took early retirement at the age of 58, in 1998, and hung up his working shoes and started golfing on a regular basis. He and his first wife, Shirley Joan Johnson of Divide Mt, were married in 1971, and had their daughter, Samantha “Sami”, in that same year. They were divorced in 1978 and Sami remained in the primary care of Larry. It was just the 2 of them until he married Diane Francis Spady of Kennewick WA. in the fall of 1999. He and Diane had many adventures traveling together and golfing. They were a matched set, and in love till, the end. Larry was an avid golfer at the Sun Willows golf course in Pasco. He would go regularly, every day if he was allowed, even passing on a few pointers to his grandson, Joe. He golfed until he underwent a not so successful elbow surgery in his 70’s, it subsequently ended his illustrious golf career. After that, he concentrated on spending time with their grand kids, Joseph “Joe” Hayden Cox, and Rubi Joan Cox and Katherine Marie Vailencour. He and his wonderful wife, Diane, were the most dedicated grandparents, taking every opportunity to spend time and travel with their grands. Larry loved those kids with all of his heart, they were everything to him. Larry quietly departed life on March 19, 2022, at 10:10pm. He was preceded in death by his brother, George Shinker and sister, Mary “Deets” Pike. He is survived by his wife of 23 years, Diane Francis Shinker; daughter: Samantha Joan Cox; son-in-law: Michael C. Cox; grandchildren: Joseph Hayden Cox and Rubi Joan Cox; Diane’s daughter: Kari Lynn Louk and her wife, Tammy Anne Louk; Kari’s daughter: Katherine Marie Valencoure; and Diane’s great granddaughter: Olivia Grace Nuttall; siblings: Marilyn Peterson, Phyllis Bancroft and Husband Bill Bancroft, Cindy Ching and husband Carlton Ching. And a host of devoted nieces, nephews, cousins and friends. Funeral service will be held at Christ the King Church, in Richland, Tuesday, 11:00am, March 29th, 2022. With the celebration of life to follow at The Elks Lodge, Kennewick Washington. On Wednesday the 30th of March 2022 at 10:00am there will be an Inurnment at City View Cemetery, Pasco WA.

The family of Larry Joseph Shinker created this Life Tributes page to make it easy to share your memories.