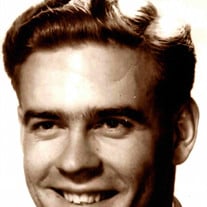 Lane Young Donaldson passed away in the arms of Jesus in the early hours of June 25, 2021, at the age of 78. Lane was born September 28, 1942 in Forest Grove, OR to Robert G. and Elma M. (Brown) Donaldson. Lane joined his older sister Berta... View Obituary & Service Information

The family of Lane Donaldson created this Life Tributes page to make it easy to share your memories.

Lane Young Donaldson passed away in the arms of Jesus in the...