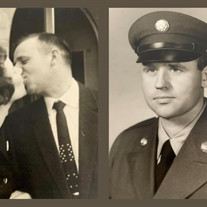 SGM La Verne "Vern" Sloppy 12/30/32 - 6/2/21 On June 2nd, 2021 Vern Sloppy was reunited with his wife, Marianne, on what would have been their 60th wedding anniversary. He was born to Lynn and Edith Sloppy née Long on December 30th, 1932 in Kennewick, Washington, the second eldest of 7 children. He was raised on a farm in West Richland. He was a graduate of Kennewick High School and received a degree in education from Eastern Washington University. Vern lived a life of service, both to his family and his country. He served 32 years in the Army as a military intelligence analyst, served 2 tours in Vietnam and worked in West Berlin during the height of the cold war. Vern is a recipient of the Legion of Merit Medal, 2 Bronze Stars and many other medals, awards and commendations. He retired in 1986 at the rank of Sergeant Major to care for his ailing wife. Vern and Mariane Lechner met while he was stationed in Germany and were married on 6-2-61 until her death in 1986, they had two daughters. Vern was a beloved father, grandfather, brother and uncle. He was preceded in death by his parents Lynn and Edith Sloppy, wife Marianne Sloppy, sister Lorraine Ferqueron and brother Roy Sloppy. He is survived by his brothers Loren, Dale, and Dean Sloppy, sister Zelma Willoughby, daughter Millie Pina, her husband Alan, their children Buddy, Abigail, Christopher, Mathew and Stephanie Pina and by daughter Madeline Snapp, her former husband Loren and their children Tyson, Zane and Erik Snapp, as well as 8 great-grandchildren and many nieces and nephews. Vern will be laid to rest with full military honors at Desert Lawn Memorial Park in Kennewick on Friday, June 11th at 11:30 am with a viewing to be held one hour beforehand. All current and former service members are invited to attend.

The family of LaVerne Lynn Sloppy created this Life Tributes page to make it easy to share your memories.