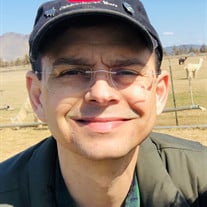 On Sunday February 9, 2020 Heaven welcomed a beloved son home. Kurt Clark Hubbard was born in Yakima, WA September 3, 1965. Kurt's love for the outdoors began at an early age as he immersed himself in God's natural wonders. His foundation as a skilled outdoorsman and steward for animals was built as he shared unique experiences alongside his father, who worked as a game warden. Kurt's enthusiasm and genuine interest in the landscape and wildlife of Eastern, WA continued to grow and leave a positive effect on everyone he met throughout his life. The Klickitat River was especially important to him as it held many special memories of Salmon and Steelhead fishing with his family. Kurt moved with his family from Zillah to Kennewick when he was 4 years old. He made many friends with his magnetic personality. Kurt graduated from Kamiakin High School in 1983, and in 1985 he joined the U.S. Army. Shortly after, he married his High School sweetheart Dana (Eichner) in 1986. This was the beginning of a love story that will always endure. Kurt and Dana enjoyed touring Europe while Kurt was stationed in Miesau, Germany. They spent many weekends sightseeing and exploring castles and historic sites. Kurt made friends everywhere he went, and was thrilled to be invited on a German hunt with a local hunting club. Kurt truly loved the saying "if you choose a job you love, you'll never have to work a day in your life". He began his career in fisheries at the Washington Dept. of Fish and Wildlife, working at several fish hatcheries. He continued to contribute to protecting the fish that he loved, Chinook Salmon, at the Pacific States Marine Fisheries Commission. He also enjoyed his position at the Army Corps of Engineers Juvenile Fish Facility at McNary Dam before his reluctant retirement in 2016 due to progressing health concerns. His work never truly ended as his experiences with wildlife left marks on his children who are following in his footsteps. Kurt was an incredibly devoted husband and father, and in 2017 when his first grandchild was born, he found a new calling in being a grandfather. He adored both of his grandchildren, and was looking forward to meeting his third, due March 9th of this year. He especially loved teaching his children and grandchildren about the natural world. Kurt was also a loyal Seahawks fan. Artistic, intelligent and with a sense of humor that could make you smile no matter what, every moment spent with Kurt was an adventure. Anyone who was blessed to know Kurt, felt his kind and generous heart. He will be missed immeasurably by many people. Kurt is survived by his wife Dana Hubbard and children Josh Hubbard, Megan (Hubbard) Preston, Zachary Hubbard and Ashlea Edwards, his grandchildren Hudson, Molly and Charlotte. Mother, Mary Hubbard, sister Kerri Hubbard, brothers Kraig Hubbard and Karl Hubbard, a large extended family and his companion dog Sage Hubbard. He was preceded in death by his father Robert T. Hubbard in 1997. Please join us for a celebration of Kurt's life on February 21st, 2020 at 3pm at Bethel Church, Richland Campus, in the Hub. A private family burial will be held at a later date. Mueller's Tri-Cities Funeral Home is in charge of arrangements.

On Sunday February 9, 2020 Heaven welcomed a beloved son home. Kurt Clark Hubbard was born in Yakima, WA September 3, 1965. Kurt's love for the outdoors began at an early age as he immersed himself in God's natural wonders. His foundation as... View Obituary & Service Information

The family of Kurt Clark Hubbard created this Life Tributes page to make it easy to share your memories.