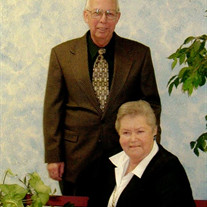 Kenneth "Ken" Vails December 10, 1935 - January 30, 2021 Kennewick, Washington - Beloved father, grandfather, Poppy, and great-grandfather, left this earth to join his true love and soul mate, Nettie, early Saturday morning, January 30, 2021. Ken was born to Bill and Dama "Brownie" Vails on December 10, 1935, in Mason City, Washington. Ken married his beautiful wife Nettie (Burch) Vails on May 8, 1953, in a double ceremony with Jim and Frances Whitehead in Yakima, Washington. Ken, a former reform school student and high school drop-out, was one of the great American success stories. He joined the US Air Force in 1954, hoping to be an airplane mechanic. Fortunately, the Air Force had other ideas and trained him as a Medic, which lead to his graduating as one of the first Physician's Assistants in the nation and ultimately obtaining his MBA from City University. After Ken retired from the US Air Force in 1976, he began his second career as a Physician's Assistant with the Hanford Environmental Health Foundation, in support of the Hanford Project in Richland, Washington, and as a Physician's Assistant for Physician's Immediate Care in Richland, Washington. Along with his devotion to his family, Ken served as an elder for the Kennewick Church of Christ for many years, was a member of the Pasco American Legion Post #34 in Pasco, Washington, where he served as chaplain, and a proud member of their Freedom Riders motorcycle group. Ken also spent many happy years as a volunteer for the Disabled American Veterans, driving the van to transport Veterans from this area to the VA Hospital in Walla Walla. Ken was preceded in death by his parents Bill and "Brownie" Vails, his wife Nettie Vails, three of his four siblings; Chuck Kroum, Rose (Kroum) Winkler and Billie Jean (Vails) Gipson. Ken is survived by: his brother Jerry Kroum; brother-in-law Allan Burch and wife Patsy; sister-in-law Ethel (Burch) Nelson and husband David; daughter Mary Lynn (Vails) Mader and husband Brian, Shirley (Vails) Pruitt and husband Jim, and Tammy (Vails) Smith; grandchildren Jennifer (Mader) Chacon and husband Kirby, Katie Mader and partner Chris Thompson, Derek Nelson and partner Krista Paulson, Heather (Nelson) Smith and husband Charly, Mikey (Nelson) Pegasus and wife Tara, Candyce Pruitt-Goddard and husband Brian, and James Pruitt; great-grandchildren Brian Mader, Garett Chacon, Amelia Thompson, Iain Thompson, Liam Thompson, Ryan Chacon, Lillian Smith, Odin Pruitt-Goddard, Obsidian Pruitt-Goddard, and Kipton Pegasus. A celebration of Ken's life was held Thursday, February 4, 2021, followed by a graveside service. In lieu of flowers, memorials may be made in Ken's name to the Disabled American Veterans at . Memories of Ken, or condolences to the family may be shared on the Mueller's Funeral Home website at .

The family of Kenneth William Vails created this Life Tributes page to make it easy to share your memories.