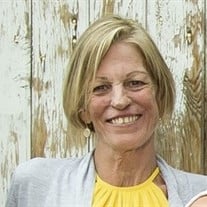 Kelleen Suzanne Hecox passed away early evening on November 29, 2021 at her home in Kennewick, Washington. Born July 29, 1956 to Melvin (Bud) and Mary Jo Brown in Redwood City, California, the family moved to San Jose, California before her school years began. Kelly grew up there in the same house on May Lane and graduated in 1974 from Camden High School. A couple years after high school, Kelly moved to Newberg, Oregon and shortly thereafter to the Tri-Cities, Washington. There she learned and developed exceptional skills with a solder iron which made her a key contributor to several manufacturing companies throughout her career. More importantly, Kelly met Tim Hecox. They were soon married and over the next several years Kelly gave birth to four children: Kevin, Karen, Amy, and Andrew. Kelly has expressed on more than one occasion that the happiest times of her life were being pregnant and being a mom. And later, she was so excited to have a grandbaby and was so much looking forward to being called Grandma Kiki. Kelly loved music and the great outdoors. Her favorite venue, the semi-annual Blues Festival at Bans Lake, Washington combined both and she attended regularly for several years. Kelly is remembered with love by: siblings, Michael, Patrick, Karen, and Melvin; and children, Kevin, Karen, Amy, and Andrew. Her memory and life's story will be kept alive for her sole grandson, Brooks Tyler Johnson (son of Eric and Amy) born August 11, 2020. It was Kelly's wish that her family and friends be spared the sadness and tears of a formal funeral type event. Instead, she wanted us all to get together, share our memories, enjoy a little fine whiskey, and celebrate her life. This event will be planned for a later, warmer date.

The family of Kelleen Suzanne Hecox created this Life Tributes page to make it easy to share your memories.