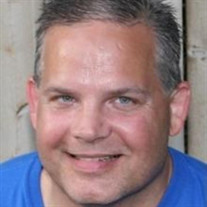 Kasimir (Kasey) Quinn Junt, 57, of Kennewick, Washington, passed peacefully from this earth into the presence of the Lord on January 18, 2022. He was born the youngest of four children to Lawrence and Monica Junt on June 23rd, 1964, in Kennewick, Washington. Kasey had a childhood full of hobbies that included camping, swimming, and dirt bike riding. He proudly earned the nickname "Professor" because he loved all things science. In 1982, he graduated from Kamiakin and worked at Tri -City Oil before he returned to school, completed his degree, and started a career at Hanford as an Industrial Hygiene Technician. Kasey met the love of his life Paula McMakin in 1992, and they were married August 17, 1996. Kasey was a jack of all trades; if something needed repaired, he fixed it and if he didn't know how, he learned how. He taught himself how to weld, make stone spheres, and create wooden chests and crosses. He also enjoyed building and flying remote control planes, cars, and helicopters as well as traveling to the Hawaiian Islands and rock collecting around the northwest. Kasey and Paula were blessed with two sons, Jacob (20) and Noah (17). He embraced the new adventures of fatherhood and taught his boys to wrestle, lift weights, ride off-road motorcycles and quads, build model cars, swim, launch rockets, and fish. Themed birthdays including piñatas and silly string fights became the standard at the Junt family parties. He also coached many of his sons' YMCA teams and even earned the "Coach of the Year" award. Due to being such a popular coach, he had to approve large team rosters with new kids requesting him as their coach. Kasey would begin each game or practice leading a team prayer. Kasey was always most generous to anyone around him, stranger or not. As his health began to change, Kasey found himself drawn to a loving relationship with Jesus Christ. With Paula by his side, they began serving in the Children's Ministry. This is where he found his true purpose in life, teaching kids the love of Christ. They spent hours together preparing lessons, crafts, and assembling cross necklaces as this new passion grew. Everyone knew if they bumped into Kasey, they would receive one of his special, trademark pocket crosses. Later he was called to Jail Ministry, and although he wanted nothing to do with it in the beginning, Kasey found it be a very fruitful ministry. As his MS progressed, his love of the Lord never wavered. Kasey is survived by his wife, Paula; sons, Jacob and Noah; sisters, Lorry Perkins and Cynthia Junt and brother, Monte (Tami) Junt; fathers-in-law and mothers-in-law Paul (Judy) McMakin and Vicki (Dave) McCurry; sisters-in-law, Marci (Rick) Bower and Noria (Dave) Tetreault and numerous nieces and nephews. He is preceded in death by his parents, Lawrence and Monica Junt. Please join the family as we celebrate Kasey's life at Mueller's Tri-Cities Funeral Home at 1401 S. Union Street Kennewick, WA on February 11th at 1:00 P.M. If you have a special memory of Kasey, the family requests you bring it on paper to the service or share it on the online guest book as they would like to assemble a book for his children.

Kasimir (Kasey) Quinn Junt, 57, of Kennewick, Washington, passed peacefully from this earth into the presence of the Lord on January 18, 2022. He was born the youngest of four children to Lawrence and Monica Junt on June 23rd, 1964, in Kennewick,... View Obituary & Service Information

The family of Kasimir "Kasey" Q Junt created this Life Tributes page to make it easy to share your memories.