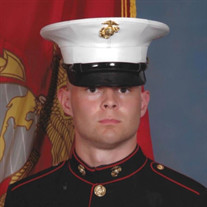 Corporal Justin Max Brewer 11/3/89 - 7/31/20 Justin Max Brewer, 30, died in a car accident on July 31, 2020 in Eureka, Montana. Although his spirit is now eternally resting with our Lord in heaven, Justin has left many of us grieving here on Earth. He was a decorated war hero who deeply loved his country, a beloved son and brother, and a devoted father of two precious little girls. His Life Born November 3, 1989, Justin grew up in Kennewick, Washington and graduated from Southridge High School in 2008. Justin loved every inch of his boyhood 7-½ acre property and enjoyed projects with his father, Craig. His “trees” were his pride and joy and he planted and cared for over 100 evergreen trees on the property - this is where his love of the outdoors blossomed. He spent his final days on Earth in Big Sky Montana, surrounded by evergreens. Justin was studying to be a radiologic technologist and was working at Kalispell Regional Medical Hospital. He enjoyed hunting, fishing, camping, working out, riding his Harley, 4-wheeling, hiking, exploring and family vacations to Dixie, Idaho. His Love of His Country USMC 0331 - India Co, 3rd Battalion, 7th Marines, OEF 2010-2011 and 2011-2012 Justin had a strong love for his country and became a Marine in 2009. It was there he demonstrated a depth of knowledge and expertise as an Infantry Machine Gunner in the United States Marine Corps. Justin was a decorated war hero who proudly served two combat tours in Afghanistan. He was also very proud to be a part of the Combat Vets Motorcycle Association - Chapter 46-1 in Montana. His Beloved Family, Daughters, and Friends Justin touched many lives with his energy, enthusiasm and encouragement. He thrived on living life to the fullest and his passion was contagious. He made it nearly impossible for anyone to be in a bad mood. He had a way about him that could get anyone to laugh. He was a best friend to many. Justin’s love for his family and friends was immense. He created a bond with all his nieces and nephews. His love and devotion to his daughters, however, was by far the greatest. Makinsey and Aria were daddy’s girls. He adored them. He looked forward to their summers in Montana, holidays and any other chance he could see them. He made the most of their time together. He shared his passion for the outdoors by taking them fishing, 4-wheeling, camping, boating and more. He also read the Bible to them every night before bed. Justin will be remembered for his laughter, animated stories, wildly entertaining humor, generous smile and unyielding devotion to his friends and family. Justin and his mom, Diane shared a deep spiritual bond. She loved his zest for life and spontaneity. She often told him, “You are my Hero. I’m so proud to be your Mom.” His Father, Craig, will miss the little boy who helped him with various projects around the property - and the brave man and father he grew to become as an adult. His absence weighs heavy on their hearts. His memory will also be cherished and kept alive by his ex-wife Justine Galston and their two children, Makinsey and Aria Brewer. He is also survived by his father and mother, Craig and Diane Brewer; his brother Chad, his wife Carmen, nieces Sarah and Hadassah and nephew David; his sister Lindsy, her husband Jason, nephew and best friend Cade, nieces Adaya, Makayla and Sienna; his grandmother, June Brewer and a loving extended family. He is preceded in death by his grandfather, Max Brewer and grandmother, Virginia Anderson. A memorial service will be held in Kennewick, WA with live streaming of the service available for those unable to attend. A memorial service will also be held in Eureka, Montana at the Chapel of Praise Church, Highway 93, Eureka, on September 12th at 11am. The family invites you to sign the online guestbook at www.MuellersFuneralHomes.com. These will be treasured and shared by those he left behind.

Corporal Justin Max Brewer 11/3/89 - 7/31/20 Justin Max Brewer, 30, died in a car accident on July 31, 2020 in Eureka, Montana. Although his spirit is now eternally resting with our Lord in heaven, Justin has left many of us grieving here... View Obituary & Service Information

The family of Justin Brewer created this Life Tributes page to make it easy to share your memories.