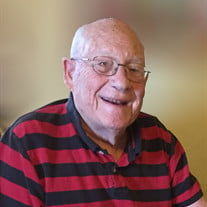 Joseph Buford (Joe) Kuhns passed away on February 11, 2021 in Kennewick at the age of 92. A graveside service will be held June 12, 2021 at 3:00 P.M. at Desert Lawn Memorial Park. Joe was born to Buford and Josephine (Numbers) Kuhns on November 24, 1928 in Boise, Idaho. The family lived at various locations in southern Idaho, where his father held the position of County Agriculture Extension Agent. Joe's mother passed away when he was eight years old, and afterwards his father remarried Anna Jean Tucker while living in Caldwell, Idaho. In 1946, the family moved to Ephrata, Washington and his father was employed as a Land Settlement Agent with the US Bureau of Reclamation, where Joe finished his last year of high school. Joe enrolled at Washington State University in 1947, and received a BS in Agriculture in 1952. During that time, he was a member of Kappa Iota Phi fraternity, and also spent one semester away in Alaska on a road survey project for eight months. On graduation, Joe received an ROTC commission, and after serving two years during the Korean War, returned to Ephrata where he owned a farm for five years. Following this, he worked for one year as a Fieldman for the Asgrow Seed Company in Warden, Washington. He then went to work for the USDA's Farm Loan Agency where he worked for a total of 35 years, retiring in 1996 with 40 years of Federal service and finished as a Loan Supervisor for five counties in southeast Washington. Joe and Jolene (Hoppe) were married on June 6, 1963 at the First United Methodist Church in Portland, Oregon. Joe was subsequently transferred to Connell, Washington and various other locations in the state before taking a role in the Tri-Cities. Joe and Jolene enjoyed travel and had the opportunity to visit many states in the U.S. and also Mexico, Canada, Bermuda, Hong Kong, China, United Kingdom, France, Germany, Italy, Argentina and Uruguay. One of his favorites trips was to Key West. Joe's interests at one time or another included golf, skiing, fishing, gardening, vintage car restoration and collecting, RV travel, Boy Scouts, Cougar football games, and enjoying the family beach house in Lincoln City, Oregon. Before and during his retirement he was active in various organizations including Rotary, Car Clubs, Kiwanis, Toastmasters, Shrine Club, Masons, Kennewick First United Methodist Church and its choir, Tri-Cities Court Club, Columbia Basin College band, and Farm Appraisers. He was known as a rather quiet, private person but like the old saying goes "still water runs deep" which was reflected in the leadership positions he held in various organizations and in his employment. Joe is survived by his wife of 57 years, Jolene of Kennewick, son Brad of San Francisco, son Murray of Kennewick, daughter Brenda of Seattle, step-sister Mary Ann (Kuhns) and Peter Ringsrud family of East Wenatchee. In lieu of flowers, donations may be made to the Washington State University Cougar Athletic Fund or the charity of your choice.

Joseph Buford (Joe) Kuhns passed away on February 11, 2021 in Kennewick at the age of 92. A graveside service will be held June 12, 2021 at 3:00 P.M. at Desert Lawn Memorial Park. Joe was born to Buford and Josephine (Numbers) Kuhns on November... View Obituary & Service Information

The family of Joseph Buford Kuhns created this Life Tributes page to make it easy to share your memories.