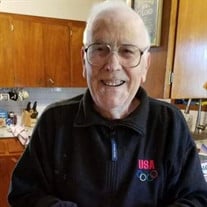 Giuseppe (“Joseph” or “Joe”) Angelo Costanzo was born in Borboruso, Cosenza, Italy on March 17th, 1931. However, due to a severe snowstorm his birth was not registered until March 19th and he oftentimes celebrated two birthdays, which he loved. He joined our Heavenly Father and was reunited with the love of his life on October 18th, 2020 at the age of 89. In November of 1949, at the young age of 18, Joseph and his mother, Fiorita, set sail on the SS Saturina on a voyage from their home in Italy to the United States where they were reunited with his father and his uncle. Joseph spent ten days at sea and swore to never step foot on a boat again, which he stood by throughout his life. He eventually made his way west via the railways and eventually planted his roots in Pasco, WA. He began working for the Northern Pacific Railroad where he would eventually retire after nearly 50 years. Joe was granted citizenship in May of 1955 and on December 19th, 1955 he married the love of his life, Sally Taylor, at St. Patrick’s Church in Pasco, WA. Joe and Sally remained prominent members of St. Patrick’s Church throughout their lives. Joe, with the help of his father-in-law Roy, built the family home in 1960 where he and Sally would build their family. Joe and Sally had 9 children in total, 7 of whom survived infancy. Joe had many hobbies that he acquired throughout his life here on Earth. He taught himself how to play the accordion, which he loved to play for his many grandchildren, as well as the piano and the harmonica. He was an enthusiast for the railroad and took pride in the model railway he set up in his “train room” within the home. He enjoyed spending time with his loved ones, whether that included telling his grandchildren the many stories from his childhood, going huckleberry picking, or even camping. He found joy in being outside doing anything he could to keep his hands busy. He was often times found tinkering in his garage where he was able to create and fix the things anybody could possibly need. He was always one to pass on his countless years of knowledge to his children and his grandchildren and always made sure his family had the appropriate skills to succeed in life. Joe spent the majority of his retirement years in his garden. He found pleasure in growing his own fruits and vegetables and was always generous in giving away what he had grown. He was commonly found on the lawnmower at his home or his children’s homes. He loved to take walks around the neighborhood and always enjoyed when one of his children had a home improvement project he was able to assist with. He found joy in the simpler parts of life and was always seen with a smile on his face. He made sure all of his children and grandchildren were loved and cared for and never stopped expressing his love for his family. Joe was an exceptional, self-built, Italian man who will be tremendously missed every day by those closest to him as well as those he had only known for a short time. Joseph is survived by his 7 children, Janice (Erik) Billings of Finley, Joyce (Tim) Ortiz of Spokane, Maryjo (Dan) Ward of Eltopia, Michael (Tracy) Costanzo of Richland, Angela (Steve) Costanzo of Pasco, Rosie (Melvin) Costanzo of Pasco, and Joe (Kelly) Costanzo of Kennewick; 18 grandchildren, 5 great grandchildren, and numerous relatives throughout Canada and other parts of the World. Joseph is preceded in death by his wife and love of his life, Sally, his brothers, Santo and Costantino, his two children, Joseph and Patricia, his parents, Simone and Fiorita, his uncle Angelo, and his in-laws, Roy and Anne Reid.

The family of Joseph Angelo Costanzo created this Life Tributes page to make it easy to share your memories.

Giuseppe (“Joseph” or “Joe”) Angelo Costanzo was born in Borboruso,...