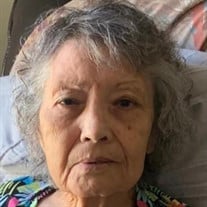 Devoted wife, daughter, mother, grandmother, and friend Josefa Gutierrez, 73, of Pasco, WA, passed on November 20, 2021, at Chaplaincy Hospice House in Kennewick, WA. Josefa (known as Pepa) was born April 6, 1948, in Anahuac, Nuevo Leon Mexico to Felix and Florencia Jimenez Lira. She was the second eldest of nine children. She married the love of her life Israel "Tex" Gutierrez on April 19, 1968. They were blessed with three children SanJuanita, Cesar and Ramon. The Gutierrez’s relocated to Pasco, Washington in 1973. Josefa worked as a farm laborer and later at Douglas Fruit Co. Her last occupation was becoming a childcare provider from her home. Josefa is survived by her Mother (100 years old), Husband, Children (& Spouses), Grandchildren, Sisters, Brothers, and many cousins, nieces, nephews and friends. She is preceded in death by her Father Felix Jimenez. Josefa will be remembered for always helping those in need, especially her mother. Her proudest moment was when she was able to purchase a home for her mother. She always had an open home for her family and friends. Josefa’s hobbies included cooking, baking, sewing, and gardening. Services will be held Monday November 29, 2021, at 10:00 am at Mueller’s Greenlee Funeral Home, Pasco, WA 99301 followed by a brief graveside service at City View in Pasco. In lieu of flowers, donations may be made in her honor to the Chaplaincy Hospice House or the Cancer Center.

The family of Josefa Gutierrez created this Life Tributes page to make it easy to share your memories.