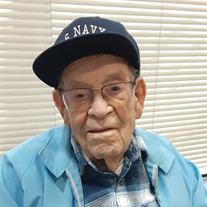 JOSÉ (JOSEPH) MARTINEZ José Martinez passed away February 5, 2021 in Kennewick, WA at age 97. He was a direct descendant (11th generation) of Hernan Martin-Serrano, a member of Oñate's colony in New Mexico (1598). José's family was from Santa Fe. Joe was born in Walsenburg, Colorado, the son of Estéban and Refugio (Trujillo) Martinez. He grew up in the mining town of Madrid, NM with his younger brothers, Ray and Henry (Enrique). In 1934, prior to the death of his father, the family moved to Albuquerque, living in Martinez Town. He attended San Ignacio Church and served as an altar boy. Joe attended Albuquerque High School. He enlisted in the US Navy in 1942, serving in the Mediterranean through 1945. He was assigned to Amphibious Forces Landing Craft as a Signalman 2nd Class. He spent the years on Landing Craft Infantry LCI-196, first in North Africa (Tunisian Operations, 1942-43), then in Sicily and Salerno landings (1943), Anzio (1944), and amphibious landings in southern France (1944). Following the war, Joe lived in Los Angeles, CA and followed a profession of painter. In 1963, he married Nellie Torres (of Albuquerque) and lived in Montebello, CA. He worked for East Los Angeles College, retiring in 1983 as Maintenance Supervisor. Following retirement, Joe and Nellie moved to Las Cruces, NM. Throughout his time in Montebello and Las Cruces, Joe was very active with the Knights of Columbus. Nellie and his brothers Ray and Henry predeceased him. He is survived by stepson Joseph Rivera and family, grandchildren and great-grandchildren in Washington State. Interment at Santa Fe National Cemetery.

JOSÉ (JOSEPH) MARTINEZ José Martinez passed away February 5, 2021 in Kennewick, WA at age 97. He was a direct descendant (11th generation) of Hernan Martin-Serrano, a member of Oñate's colony in New Mexico (1598). José's family was from... View Obituary & Service Information

The family of Jose "Joseph" Martinez created this Life Tributes page to make it easy to share your memories.