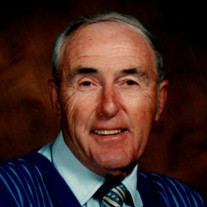 John Howard "Bud" Smith passed away on January 6, 2021, after a short illness. Bud was born September 10, 1925, in Bottineau, North Dakota. His parents were Robert B. Smith and Viola Herrmann Smith, and he joined two sisters, Betty and Virginia. By the time Bud was 7 years old, both parents had passed away and he was raised by his uncle, Dr. Max R. Herrmann, and his wife, Merna in Duluth, Minnesota. When he was 17 years old, he signed up to join the Navy, and in February 1943 began training at Farragut, Idaho, Treasure Island, and Point Montera gunnery school. In November 1943, he became a crew member of the newly commissioned Destroyer, the USS Laws, DD558. In February 1944, the ship left San Francisco for combat in the Pacific. They spent 20 months in the combat zone where they fought in 10 major battles and hundreds of other engagements. During the entire time, he was the First Loader of the Main Battery Five Inch Gun. The last battle at Okinawa was the worst. 40 Destroyers started the battle, but most were knocked out by suicide planes. The entire squadron was either sunk or out of commission, except the USS Laws. After that, the ship became known as the "Lucky Laws." The ship returned to home port in Seattle in September 1945, then went to San Diego to be decommissioned. His enlistment was up in September 1946, but he missed his flight to Seattle. That plane crashed on Mt. Rainier with no survivors and the wreckage wasn't found for nearly 40 years. After returning safely to Walla Walla, Bud attended Whitman College and then came to the Tri-Cities for his main working life. He worked in real estate and for the Trans World Oil Co. In 1953, he joined James P. McClenahan Insurance Adjusters, becoming manager in 1958 and owner in 1960. As sole owner, Smith-McClenahan Insurance Adjusters handled multiple lines of claims for 40 years. He married the love of his life in December 1969, and the next 50 years were spent with her in their home on the banks of the Columbia River. He is survived by his wife, Karol, and daughter and son-in-law, Candice and David Rose. He was predeceased by his sisters, Betty Stevens and Virginia Gagnon. He gave 4 years of his life for his country by choice, and in war and peace saved the lives of 6 people. Throughout his life, he always tried to be fair with people. All in all, it was a great trip with few regrets.

John Howard "Bud" Smith passed away on January 6, 2021, after a short illness. Bud was born September 10, 1925, in Bottineau, North Dakota. His parents were Robert B. Smith and Viola Herrmann Smith, and he joined two sisters, Betty and Virginia.... View Obituary & Service Information

The family of John Howard Smith "Bud" created this Life Tributes page to make it easy to share your memories.