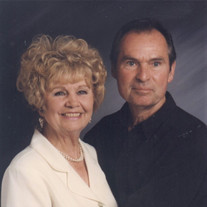 Shirley Lorene Bradymire, 87, passed away on July 17th, 2020 in Kennewick, Washington. She was born September 11th, 1932 in Clarkston, WA, the daughter of Donald and Verna Miller. John "Jack" Wayne Bradymire, 87, passed away on July 20th, 2020 in Kennewick, Washington. He was born September 7th, 1932 in Berger, Missouri, the son of William and Birdie Mae Bradymire. Shirley Graduated from Couer' dAlene High School in 1950 where she met and married the love of her life, Jack Bradymire. Jack and Shirley raised two daughters Patty and Philadelphia. They settled down in Kennewick, WA in 1972. Shirley worked at Battelle for 20 years and at Hanford for many more in data entry as a contractor. Jack worked primarily as a meat cutter before retiring and staying home to raise their grandson. Shirley will be remembered for her Infectious kindness - she never knew a stranger. She was strong, selfless and had an unconditional love for her family. Jack will be remembered for being a dreamer, his vibrant personality, sense of humor, humility, and kindness and unconditional love for his family. Always together, they spent their time tending to their garden, doing yardwork, and going on walks. Shirley is preceded in death by her parents Donald and Verna Miller, brothers Donald Miller Jr., and Richard Miller, sisters Donna "Darlene" Dell, and Betty Dowdy. Jack is preceded in death by his parents Harold and Birdie Mae Bradymire, sister Mary Lee Babbitt. Both are preceded in death by their son John Bradymire Jr., and daughter Patricia "Patty" Bradymire. Shirley is survived by her brother Fred Miller of Lewiston WA, and Jack is survived by his brother Wallace Bradymire of Couer' dAlene, ID. Both are survived by their daughter, Philadelphia Bradymire of North Port, FL.; Three grandchildren: grandsons Zechariah Boothe of Vancouver, WA, Jeremiah Bradymire of San Antonio, TX, and granddaughter Corinna Alvarez of Roseburg, OR.; Seven great grandchildren: Izaiah, Ezekiel, Zevin, Haley, Madison, Jacob and Jonah. We Love You Mommy and Daddy! We will feel your presence in every breath we take - We will take you wherever we go until we meet again. We will be forever grateful to Greg Webb of Yakima for the wonderful job you have done caring for Jack and Shirley for nearly a decade, tending to their needs and affairs. The family would also like to thank Callaway Gardens of Kennewick and especially Will, Anna, and Lourdes and the rest of their staff for the years of expert care they provided. An Inurnment ceremony will be held at Desert Lawn Memorial Park in Kennewick, Thursday, July 30th, 2020 at 10am.

The family of John & Shirley Bradymire created this Life Tributes page to make it easy to share your memories.