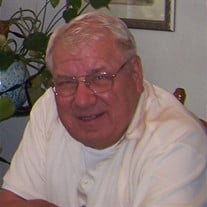 3/8/1936 - 4/26/2020 Joe Jackson - adoring husband, father, grandpa, pops, papa, left us to be with God and reunite with the Love if his life, (Betsy B) on April 26, 2020, after a 31-day fight to beat and recover from the COVID Virus. During his fight which allowed us to see him one last time, dad inspired many around him and provided hope during this unprecedented time. Joe was born March 8, 1936 in Miami, Oklahoma to Clifford and Sylvia Jackson. Joe's family moved to Pasco, WA eventually settling in Prescott, WA. Joe Graduated from Prescott High School. He attended 2 years at In Montana. Joe served in the United States Army for 2 years during which time he was introduced to the Love of his Life, Betty. Joe proposed to Betty under the Golden Gate Bridge and they never looked back. After they were married in February 1961, they lived in Pasco, WA eventually set telling in Kennewick, WA. Over their amazing 59 years of marriage they had 3 children, Jennifer, Julie and Joe Jr. In their early years of marriage Joe worked for the airlines and eventually was owner and operator of KayMax Travel Agency. After closing the family business, Joe drove for Ben-Franklin Transit until his retirement. Joe was a proud husband and father, always placing family first, or anyone else that he could help. He found the greatest joy in watching his children participate in sports, Basketball, Softball, Volleyball, Soccer and Baseball. He was at every game possible and usually keeping score while cheering us on and keeping track of ways to improve our game. Along with sports he would do projects around the house, swim, camp and travel with his family always making sure there were great adventures along the way. His joy for family only grew when his grandkids came along, he then got to follow all of their activities, dance, soccer, baseball, football, basketball, more dance, cheer and drama. Joe taught his kids how to live and enjoy life, always encouraging them in anything they tried. Joe was proceeded in death by: Parents, Clifford and Sylvia Jackson, Sister Georgia Young, Brother Jack H. Jackson, and the love of his life Betty B. Jackson. Joe is survived by: Children- Jennifer L. Nice, (Husband, Scott Nice), Julie K. McGrath, (Husband, Markus McGrath) and Joe D. Jackson Jr, (Wife, Tracy Jackson). Grandchildren- Baylie K. Nice, Joe D Jackson III, Kolby R. Jackkosn, Natasha K McGrath, Kasandra K. McGrath, and Kendrah G. McGrath. Little Brother- Jerry Jackson, (Wife, Shirley). Dad, Our hearts are broken knowing that you are no longer with us, but we find comfort knowing that you have been reunited with mom. We miss you both dearly and we will see you again one day. Rest in paradise. We love you Dad! In lieu of flowers please make donations to the (Williams Syndrome Association) @ Williams-syndrome.Org (Make a Donation), in honor of Grand Daughter Kasandra

The family of Joe Donald Jackson Sr. created this Life Tributes page to make it easy to share your memories.