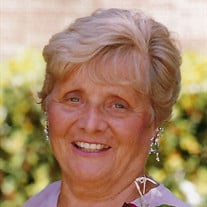 Joan M. Lambert passed away December 14, 2019 surrounded by family and friends following a brief illness. A Kennewick resident since 1955, Joan was born to Mark Bodovinitz and Virginia Arnold on August 19, 1932 in Virginia, Minnesota. She attended St. Scholastica College and graduated from University of Minnesota. A Certified Radiologic Technologist, Joan began her career in the Imaging Center at Cedars-Sinai Medical Center in Los Angeles. She moved to Washington to be closer to family, and settled in Kennewick where she was employed at Kennewick General Hospital and Tri-City Radiology. In 1957, she married Robert S. Lambert, RPH. During their 45 years together, Bob and Joan raised two sons, and operated Lambert Pharmacy in Kennewick. In her later years, Joan volunteered at Columbia Park to run the J and S Dreamland Express Train. She had a way with young children and spent several years volunteering with Team Read in Kennewick elementary schools. She never failed to beam with pride at the progress made by the children with whom she worked. Joan was an avid skier and golfer, and actively supported her childrens' athletic pursuits. A WSU Cougar by marriage, she followed the Cougs through thick and thin. She followed the Mariners and Seahawks faithfully, attending games whenever she could. Joan also loved to travel, counting trips to Russia and New York among her favorites. Joan believed strongly that there was a right way to do things. She was fiercely loyal, especially to those she loved, and fought to right any perceived injustice. Joan loved her children dearly and took great pride in their accomplishments. She encouraged her childrens' efforts, responding "Of course you should! You'd be good at that" when they expressed interest in trying something new. In the years that her boys swam competitively and faced tough races, she coached her sons to, "Just put your head down and go!" - which applied to life, not just sports. Joan was predeceased by her husband Robert and brother Richard Bodovinitz. She is survived by her sons Robert S. Lambert, Jr. (Patty) of Sharpsburg GA, Mark W. Lambert (Danielle) of Lake Oswego OR; grandchildren Steven Lambert of Nashville TN, and Julienne (Brent) Morris of Statham GA; siblings Jean Moore, Mark Bodovinitz Jr., Gary Bodovinitz; and numerous nieces and nephews. Family graveside and memorial services will be held at Mueller's Tri-Cities Funeral Home on March 14th. A public reception will be held at 5pm on March 14th at the Bite at the Landing in Columbia Park

Joan M. Lambert passed away December 14, 2019 surrounded by family and friends following a brief illness. A Kennewick resident since 1955, Joan was born to Mark Bodovinitz and Virginia Arnold on August 19, 1932 in Virginia, Minnesota. She... View Obituary & Service Information

The family of Joan M Lambert created this Life Tributes page to make it easy to share your memories.