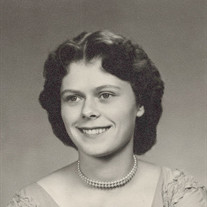 Mrs. Joan Elizabeth Chase of Basin City, Washington, died on September 4, 2020, at the age of 87 in Richland, Washington, after many years of declining health, which included a diagnosis of ALS. Joan was born on December 30, 1932, in Boise, Idaho. She lived with her parents, Clarence and Maudie Mae Walker, and siblings Evelyn (Brown) and Clare in Emmett, Idaho. Joan grew up running around the small town, and enjoyed softball, riding bikes and games. She painted windows for local businesses at Christmas time and graduated from Emmett High School. She read the local newspaper throughout her life and enjoyed her class reunions. On Valentine's Day 1954, Joan married Russell Chase. While Russell attended the University of Idaho, Joan was active in the "Dames Club" and began her family. Russell and Joan moved to Basin City in 1958 to homestead Unit 47 in Block 19 with their two daughters Debra and Brenda. They built a thriving farm and added two more children, Tim and Colette, to their family. They attended Messiah Lutheran Church in Basin City where they were active members, and enjoyed creating and maintaining community life among friends and neighbors too numerous to name. Through the years, Joan worked at a variety of local businesses. She did accounts receivable for Petra Vandiver at Mesa Builders, worked for Steve Price at Wickes bean plant in the 70's, was Secretary of the Board of Commissioners of Franklin County Fire District #4, and especially enjoyed working as a teacher's assistant at Basin City and Mesa Elementary Schools, and at Old's Jr. High School. Joan is fondly remembered for her talent of putting a full meal on the table, precisely timed so that everything was hot. She loved to drive her Volkswagen bug and lively conversations over tea or coffee. Russell and Joan enjoyed many road trips throughout the US, Canada, and Mexico. She was an avid Mariners and Seahawks fan. Joan was a creative person with a beautiful singing voice and she loved to play the piano (if no one was around to hear her). She enjoyed theatre and musicals. Her children were encouraged to practice tap dancing in the kitchen and to practice on a full drum set in the living room. Joan enjoyed having her grandchildren at the farm. She made wacky cake with them and getting treats from McDonald's. Great-grandchildren enjoyed rides on her wheelchair and playing board games. Grandma listened. Joan studied the Bible and read a devotional every morning. In life, Joan's personal relationship with Jesus Christ remained a source of challenge, hope, and strength. She passed in peace. Joan was loved, and will be remembered and missed by brother Clare Walker and children Debra Chase, Brenda Adams (Randy), Tim Chase (LeAnn), Colette Broadhurst (Mike), 8 grandchildren, 13 great-grandchildren, 3 great-great-grandchildren, and numerous nieces, and nephews. Joan was predeceased by husband Russell, parents Clarence and Maudie Mae Walker, siblings George Walker, Goldie Maus, Evelyn Brown, and Lucella Walker. A graveside service for immediate family will be held. Flowers and condolences may be sent to Mueller's Funeral Home, 1401 South Union Street, Kennewick, Washington 99338. Donations may be made in Joan's name to Franklin County Fire District #4, 6725 R 170, Basin City, Washington 99343.

Mrs. Joan Elizabeth Chase of Basin City, Washington, died on September 4, 2020, at the age of 87 in Richland, Washington, after many years of declining health, which included a diagnosis of ALS. Joan was born on December 30, 1932, in Boise,... View Obituary & Service Information

The family of Joan E Chase created this Life Tributes page to make it easy to share your memories.