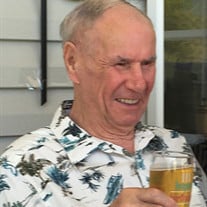 Our dear father, dad, grandpa, Papa Paul lost, his short battle with cancer on March 2, 2022, at the age of 87. Now, we rejoice as he joins his Heavenly Father! Jeremiah "Paul" Faith was born in Hancock, Maryland and was a 40+ year resident of the Tri-Cities, Washington. After serving proudly in the United States Air Force from 1953-1963, he moved his family of eight kids, wife, dog, and cat to Lake Stevens, Washington in 1968 to work for Boeing. While at Boeing, he helped to manufacture the first Boeing 747. From planes to trains, he began work as a brakeman/switchman with the Burlington Northern railroad in Pasco, Washington, retiring in 1994. Paul enjoyed working on cars, fishing, and the occasional trip to the casino. His most cherished time was with his bigger than life family and their get togethers, especially during the holidays. He will be missed by those family members who survive. They are: his children - daughter, Linda McLaughlin of Richland, WA; daughter, Barbara Weakley of Kennewick, WA; son, David Faith and daughter-in-law, Debbi Faith of Kennewick, WA; daughter, Lisa Strickland and son-in-law, Shane Strickland; son, Mark Faith and daughter-in-law, Shari Faith of Kennewick, WA; and sister, Zelda "Butch" Bullis of Walla Walla, WA; along with 18 grandchildren, 15 great-grandchildren and many nieces and nephews. Paul is preceded in death by his wife of 38 years, Evelyn Faith; his parents; siblings; sons, Ronald Paul Faith and Charles Randall Burton; and grandson, Dallas Carroll. Services will be held at 10:30 a.m. on Friday, March 11, 2022, at the First Baptist Church Pasco, 1106 North Road 36, Pasco, WA, followed by the graveside service at 12:00 noon at the Riverview Heights Cemetery, 1200 South Olympia Street, Kennewick, WA. All are welcome to come celebrate Paul's life here on earth. In lieu of flowers, please send donations to Magdalena Adult Family Home, 1207 North Quebec Street, Kennewick, WA 99336.

Our dear father, dad, grandpa, Papa Paul lost, his short battle with cancer on March 2, 2022, at the age of 87. Now, we rejoice as he joins his Heavenly Father! Jeremiah "Paul" Faith was born in Hancock, Maryland and was a 40+ year resident... View Obituary & Service Information

The family of Jeremiah Paul Faith created this Life Tributes page to make it easy to share your memories.