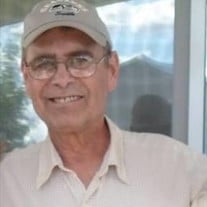 On Saturday, August 22, 2020, Jay Dale Weber, loving husband, father, son, brother, uncle, nephew and grandfather passed away at his home in rural Pasco, WA at age 64. Jay was born in Torrington, Wyoming on November 29, 1955 to Wayne Weber and Evelyn (Schroeder) Phifer. He grew up on a 1100-acre farm and lived in Wheatland, Wyoming during his early years. Jay then moved to Pasco, Washington in his thirties, where he resided near his mother and stepfather Zack Phifer. He married Joanne Crawford on June 13, 2000 and they have one son, Chadwick Weber. His daughter Melissa Bauer from a previous marriage resides in Prairieville, LA and his two grandchildren are Bailey and Buddy Bauer. He attended the University of Wyoming and Columbia Basin College where he earned his welding certification. He worked various agriculture, metal fabrication and landscaping jobs throughout his life then retired. Jay will be remembered for his kind and compassion spirit, who was ready to give a helping hand to his family and friends. He had an artist eye with a hand for painting, sculpting and creating art. He was an outdoorsman who enjoyed camping and fishing. His rural farming background transitioned into caring for his own small orchard of fruit and nut trees on his own acreage. He was preceded in death by his paternal grandparents Vera and Albert Weber, maternal grandparents Betty and Henry Schroeder, father Wayne Weber and stepfather Zack Phifer. He is survived by his wife Joanne Weber of Pasco, WA, son Chadwick Weber of Laramie, WY, daughter, Melissa Bauer of Prairieville, LA; grandchildren, Buddy Bauer of Bryan, TX and Bailey Bauer of Prairieville, LA; mother Evelyn Phifer of Pasco, WA; sister Beth (Mark) Darby of Thornton, CO, brother Kyle (Sue) Weber of San Luis Obispo, CA, sister Joni Darby of Sandwich, IL, stepbrothers, Bard (Kelli) Phifer of Wheatland, WY and Reid Phifer of Jackson, WY; an aunt, uncle, and several nieces, a nephew, and cousins. Memorials may be directed to the family. A memorial service will be planned at a later date.

The family of Jay Dale Weber created this Life Tributes page to make it easy to share your memories.