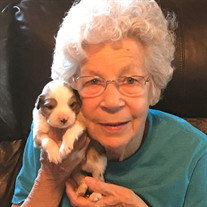 Janet Maxine Haren, age 88, was taken home to Heaven on April 4, 2020 at Trios Hospital in Kennewick, WA. due to complications of covid-19. Janet was born October 9, 1931 in Canton, Ohio to Fred and Lillian (Benedum) Rhine. She attended Timkin High School in Canton, graduating in 1949. She was a member of the marching band and orchestra, playing clarinet and violin and worked while in school at Heggey's Candies. One of her favorite gifts to give at Christmas were these candies. After graduating she married Dad, Eugene Haren, on August 20, 1949 and resided in Canton bringing three boys into the world before relocation to Aston, PA in 1962. While in Aston she was employed by PMA Insurance in Wilmington, DE as a claims adjuster. A final move to Kennewick, WA was made in 1975 where she worked for JC Penny and See's Candies. Mom was an active bowler in both PA and WA. She enjoyed family vacations, travels and Elder Hostel trips with her husband Gene to many States and Countries. Mom was a devout Catholic and member of St. Joseph's Parish in Kennewick, where she was an active member of the Catholic Daughters of America participating in the monthly bake sales and various other activities, as well as weekly Adoration at the Chapel for 22 years. Janet is survived by her sons Steven (Sandra) of Council, ID., Mark and David of Kennewick, WA; stepsister Mary Francis Woods of Louisville, Ohio; grandchildren Kelly (Laura) Haren of Auburn, WA, Tod (Jennifer) Haren of Salem, OR, Peter Haren of Meridian, ID, Kyla Haren (Matt) of Walla Walla, WA, Drake Haren of Spokane, WA, Bonnie (Robert) Van Elem of Pasco, WA, Beth (Lonnie) Sparks of Pasco, WA; 9 great grandchildren and 4 great-great grandchildren; nephews Terry Rhine of N. Carolina and Joe Haren of Kennewick, WA; nieces Nona Krumlauf of Canton, Ohio, Anita Samson of Virginia and Carla Rhine of Navarre, Ohio. She was preceded in death by her husband of 57 years Eugene, parents Fred and Lillian (Benedum) Rhine, brother Jack Rhine, nieces Sherry Watts and Kathy Lee Rhine; nephew Jeff Tucker. Knowing Mom was knowing what love and caring truly is and it is with a great sorrow that we have to say goodbye. Burial will be at Desert Lawn Memorial Park in Kennewick, WA. A mass and memorial will be scheduled at a later date when we can gather to celebrate her life.

Janet Maxine Haren, age 88, was taken home to Heaven on April 4, 2020 at Trios Hospital in Kennewick, WA. due to complications of covid-19. Janet was born October 9, 1931 in Canton, Ohio to Fred and Lillian (Benedum) Rhine. She attended Timkin... View Obituary & Service Information

The family of Janet Maxine Haren created this Life Tributes page to make it easy to share your memories.