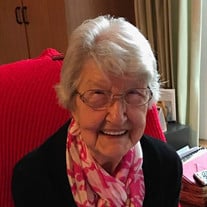 Jane Marie (Hardt) Danz was born February 25, 1919, the eighth of eight children. Her spirit departed this world December 7, 2019 at the age of 100, and she now speaks a heavenly language. She was born in Pekin, Illinois and spent her childhood with her parents, four sisters and three brothers. After high school she took nurses training at Proctor Hospital in Peoria, Illinois and Cook County Hospital in Chicago, Illinois. After receiving her RN, Jane worked at Proctor Hospital where she met Edwin Danz, who had been injured in an auto accident. They were married a year later on March 22, 1947 and the city girl moved to the farm, started a family, helped milk cows, shovel coal for the old furnace. Edwin and Jane traveled to Washington in 1955 to have a look at the Columbia Basin Project, drew a farm and then moved the family to Mesa the summer of 1957. It was quite an adventure that lead to them being inducted into the Agriculture Hall of Fame in January 2009. Jane wanted Edwin to retire but she knew he wouldn't quit worrying about the farm unless he left the Basin. She got her wish, they moved to Lincoln City, Oregon in 1978. They enjoyed the coastal climate and hosting family and friends. Jane was very involved in the Lutheran Church there. Edwin passed in September 1983. Eventually wanting to be closer to her family, Jane moved to the Canyon Lake Community in Kennewick, Washington in 2000. Jane attended Bethlehem Lutheran Church in Kennewick. Amazingly, she lived alone in her home at Canyon Lakes until after her 100th birthday. How can the life of someone who has lived a century be summarized?!! Devotion to faith, kind and loving, patient, caring, slow to anger, quick to encourage. Not known to complain, brave, courageous are things that come to mind about our Mother. She lived an exemplary life. Jane is survived by her four children: J.J. (Judith) Danz of Mesa, Sylvia (Steve) Halverson of Pasco, Louise (Dave) Whitemarsh of Richland, Roger (Pamela) Danz of Mesa. Eight grandchildren: (Icyle Danz), Christopher (Kathy) Danz, Jon Halverson, Amy (Blake) Hall, Shawn (Katie) Sanderson, Ryan (Arsenia) Sanderson, Luke Danz, and Paul (Talitha) Danz. 18 great grandchildren and one great great grandchild. Jane is preceded in death by Edwin Danz, parents: Otto Hugo Hardt and Laura Josephine (Graham) Hardt, brothers: William, Walter and Albert Hardt. Sisters: Esther Larimar, Thelma Oltman, Laura Johnson, Ellen Warner and one grandson: Steven Danz. Per Mother's wishes the family will only be having a private graveside service. Her remains will be placed at Sunset Memorial Gardens next to her late husband, Edwin. Please leave any comments for the family at the Mueller's website. The family wishes to thank Hospice House in Kennewick for the excellent care of our Mother in her last hours, what a blessing to have had their help. Will miss you dear Mom!

Jane Marie (Hardt) Danz was born February 25, 1919, the eighth of eight children. Her spirit departed this world December 7, 2019 at the age of 100, and she now speaks a heavenly language. She was born in Pekin, Illinois and spent her childhood... View Obituary & Service Information

The family of Jane Marie Danz created this Life Tributes page to make it easy to share your memories.