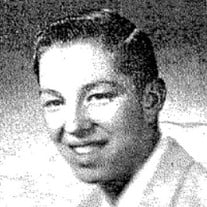 James Eugene Safford Gene Safford, 85, was born April 27, 1935 in Pasco, Washington to James Ellrie and Eleanor Ida Lewis Safford. He passed away peacefully on January 30, 2021. Gene graduated from Kennewick HS in 1954 and lived in Kennewick his entire life. He married Laura Lee King on July 18, 1959 at the Highland Methodist Church in Kennewick. They were married for 49 years, until Laura's unexpected passing on October 11, 2008. Gene worked for 51 years in the floor covering business, and was in the Army National Guard for 12.5 years, rising to the rank of Sergeant First Class. Gene and Laura were members of the Kennewick Jaycees for 12 years, Laura as Lady Jaycee President and Gene as State Vice President, both winning many awards for service to the community. Gene and Laura had 3 sons, Ron (Desiree Ross) of Clinton, WA, David (Cherry) of Kennewick, and Scott (Karen) of Bend, Oregon; a beloved former daughter-in-law, Cindi James of Bothell, WA; and Gene had 2 children from a previous marriage, Kathy (Rick) Johnson of Bellevue, WA and Jim Boone of Brandon, Mississippi. Gene is survived by his sister, Marge Fox of Kennewick; grandchildren, Natalie, Kiana, Alani, Madelyn, Olivia, Elizabeth, Allisan, and Tony Safford, Tamara O'Neal, Killian and Kiah Ross, Adrian and Rusty Floyd; great-grandchildren, Ashley, Austin, Kayden, Damien, Corbin, Kelton, Bob, Zane, Logan, and Willow Floyd, Brendan Hill, Ashlynn Thompson, and Alyssa O' Neal; and great-great-granddaughter, Eleanora Kinslee. Gene was preceded in death by his wife, Laura Lee, son David, parents Ellrie and Eleanor, siblings Richard, Anita, and Wesley, and great-granddaughter Kira Floyd. Gene's hobbies were baseball, baseball, and baseball, spending lots of time with his grandchildren, and trying to make friends. Gene's biggest challenge was trying to be a better person in life. He was the original "grumpy old man," but always the class clown when it came to having a joke for every occasion; some of them really bad! He will be loved and missed by his family and all who knew him. The family would like to express their appreciation to the staff at Creekstone Assisted Living for their wonderful care of Gene in the last 2 months of his life. Date of memorial service to be determined later.

The family of James Safford created this Life Tributes page to make it easy to share your memories.