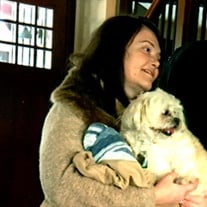 Jessica Janet Reinig Reid, dearest daughter, beloved companion, and caring sister, passed away on February 19, 2020. She battled serious illnesses throughout much of her adult life, especially the last three years, and did so with immeasurable courage and resourcefulness. These were the outstanding qualities that marked her all too-short life. Jessica was born February 20, 1971, in Redmond, Oregon, to Bill and Marjie Reinig, and later became the big sister of Zachary and Nikolas. Life was filled with school, camping and tennis activities, as well as visiting grandparents in Oregon and Idaho. She attended Kennewick schools as she enjoyed her friends and being on the varsity tennis team all four years of high school. Following graduation from WSU, Jessica set out to experience "big city" life and moved to New York City, where she lived for several years. She found employment helping to organize professional tennis tournaments and later, helping promote small films for a French film company. These jobs enabled her to attend international tennis tournaments and film festivals, including those at Cannes and Sundance. Jessica returned to the Tri-Cities and led a more peaceful life, closer to family. She had various jobs in the area, including working in a law office. Jessica further enjoyed her last many years because of a long-term relationship with Brian Cady, in which she felt safe and loved. She was happy in his company, whether it be hiking, going to concerts, or hanging out at home. She also enjoyed a close relationship with Brian's family. In addition to her parents and brothers, sister-in-law Molly Moon Neitzel and two nieces, February and Odessa, were joyfully added "to the mix" in the last few years. Jessica also continued to be close to her loving aunt Ginny. In spite of her painful illness and constant medical procedures, Jessica was able to bravely meet these challenges, stay optimistic and enjoy her last years She never stopped caring and showing her concern for those she loved, often giving heartfelt and valuable advice. Hearing about her brothers' or little nieces' adventures always made her happy. Our hearts are broken-she is gone far too soon. She has left an emptiness that no one or no thing can fill. Left to carry on are surviving parents, Marjie and Bill Reinig, brothers Nikolas and Zack (Molly), nieces February and Odessa, Brian Cady and his daughters and mother, Paula Thompson, cousins Crispin Rosenkranz and Yavohne Williamson and aunts/uncles Ginny and Pat Rosenkranz and Ron and Cherie Reinig. A private family service will be held.

Jessica Janet Reinig Reid, dearest daughter, beloved companion, and caring sister, passed away on February 19, 2020. She battled serious illnesses throughout much of her adult life, especially the last three years, and did so with immeasurable... View Obituary & Service Information

The family of Isabella Janet Reid created this Life Tributes page to make it easy to share your memories.