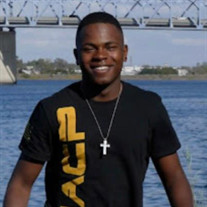 Isaac was born in Las Vegas, Nevada on December 28, 1997. Two weeks later, he was reborn to Ron and DeVon, and Zackary Mabry, and was raised in Kennewick, Washington. He was educated in the Kennewick School District, graduating from Southridge High School in 2016. Isaac was playing hockey before he could ride a bike and quickly became an expert at checking. He had the distinction of the most time in the penalty box. We could see his determination by the age of 5 — his need for speed, and love of contact drove his passion for xtreme sports, including: skateboarding, BMX biking, snow-boarding, football and archery. He did all of these things for the love of the sport, and the joy of movement, not just for competition. Isaac joined the United States Army National Guard during his junior year of high school and earned his certification as a heavy equipment mechanic. He used his skills at Joint Base Lewis McChord. He had just started a career at Amazon and was in the process of starting his own powerwashing business. Family and friends were always important to Isaac. He was very protective of both and worked to make sure everyone was taken care of. One way he expressed his love was by cooking for his friends, especially seafood and steaks. His musical tastes were eclectic. A fan of vinyl, he had an ear for great music across all genres and even loved the oldies. Isaac had an artist’s eye which was evident in his photography and a deep appreciation of many forms of art. Isaac loved chasing waterfalls, hiking, fishing, hunting, crabbing, bonfires on the coast, and exploring abandoned places. One of his proudest moments was his successful turkey shoot. He was always happy in the company of trees. Isaac has touched many lives during his 23 years. Our family has been overwhelmed by the outpouring of love expressed through cards, gifts, messages, visits and donations. Isaac is survived by his father, Ron, mother, DeVon, brother, Zackary (Monica), and his girlfriend Alexis. He will be forever loved and missed by many aunts, uncles, cousins and friends. In lieu of flowers and gifts, please consider donating to thetreesremember.com via GoFundMe. We are planting a forest for Isaac! A memorial service will be held Sunday, August 15, at 4:00 pm at The Living Room Community Church, 1409 S Garfield St, Kennewick, WA. Livestream information can be found at https://www.facebook.com/tlrcommunity/?ref=ts.

Isaac was born in Las Vegas, Nevada on December 28, 1997. Two weeks later, he was reborn to Ron and DeVon, and Zackary Mabry, and was raised in Kennewick, Washington. He was educated in the Kennewick School District, graduating from Southridge... View Obituary & Service Information

The family of Isaac Alonso Mabry created this Life Tributes page to make it easy to share your memories.