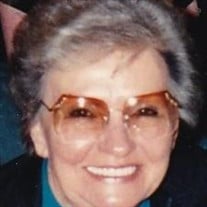 Irene passed away peacefully into the Arms of her Lord and Savior, Jesus Christ, on the evening of January 29, 2021, after a long illness, in Pasco, WA. She was 88. Irene was born October 19, 1932 in Denver, Colorado to Parents: Robert Ewell and Susan Cynthia (Morrison) Newton. Her mother passed away when she was only eight. She grew up in Denver, Las Vegas and Pasco with her father, brothers and step mother. Upon returning the Tri-Cities, Irene attended Columbia High School and Pasco High School. At the age of 17 she married her first sweetheart, Raymond L. Black on July 10, 1950 in Pasco, Washington. Ray had just gotten out of the Navy and was working locally. She and Ray enjoyed country music and spent time going to dances, visiting family, playing cards and raising their two boys, Ron and Jim. She and Ray were divorced in 1970. She Retired from Lamb Weston in Pasco after 25 years as the Scale House Lady and Operator. During that time she met Jim Young who was an upholsterer in Pasco. They Married in 1973. Jim and Irene enjoyed many years traveling and camping with their pickup and camper and enjoying the northwest. They enjoyed their many friends and as active members of the Eagles and Moose Lodge. We will all miss her smile, love and celebration s with her many friends and family. She had a dry sense of humor, probably from her English heritage. Her laughter still rings in our ears. She stayed close to her boys and loved them with all her heart. Irene will be buried next to her Husband, Jim, at the City View Cemetery on Oregon Avenue in Pasco, WA. She was preceded in death by her loving husband, James Edward Young in 2005. Also preceding her in death were her Mother (Susan), Father (Robert), Brother (William) and Brother (Herbert) along with her Step Mother (Ada) and two Step Sisters (Geneva and Betty). Irene is survived by her two Sons: Ron Black (Debby Sax), Jim Black and a Grandson Justin Black. She is also survived by her close loving Brother, Robert (Marcie) Newton. The family would like to thank the Caregivers, First Responders, Hospice and Muller’s for their services. In lieu of flowers, the family would like donations to be made to Tri-Cities Chaplaincy Hospice.

Irene passed away peacefully into the Arms of her Lord and Savior, Jesus Christ, on the evening of January 29, 2021, after a long illness, in Pasco, WA. She was 88. Irene was born October 19, 1932 in Denver, Colorado to Parents: Robert Ewell... View Obituary & Service Information

The family of Irene G. Young created this Life Tributes page to make it easy to share your memories.

Irene passed away peacefully into the Arms of her Lord and Savior,...