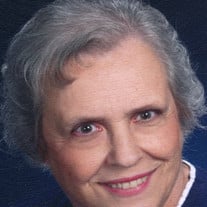 Ida Belle (Elliott) Hart of Pasco, Washington, passed away on February 13, 2020 with family by her side at a memory care facility in Kennewick, after a long illness. She was born October 16, 1938 to Frank and Maude Elliott. She spent her early years in Kansas until her family moved to California, to work in the shipyards during WWII. They moved to Kennewick when Ida was 9. Ida graduated from Kennewick High School in 1956, then worked for General Electric Company, Hanford Operations in Richland, WA. She took classes at Eastern Washington University and Columbia Basin College. During this time, Ida met the love of her life Harvey Austin Hart, and they were married six months later. In 1960, they moved to Spokane, where she worked for Vinnell Corporation at Fairchild Air Force Base while Harvey finished college. Upon his graduation in 1961, they moved to Pasco, where Ida worked as the Secretary to Assistant Superintendent at the Pasco School District, while husband Harvey taught school. Ida became a homemaker when daughter Kari, and then son Harvey, came along. In 1969, she went back into the secretarial and payroll workforce, employed by Washington Collectors Tri-Cities, and then the Credit Bureau of Tri-Cities (Linton family). In 1983, she found the job she was made for at the Pasco School District, as Executive Secretary to Director of Personnel, and eventually Manager of Certificated Records. She was responsible for all teachers' and administrators' records, and worked there for 23 years before retiring. After retirement, she worked for the Pasco Association of Educators (PAE). As a faithful follower of Christ, Ida and her husband raised their two children in the Pasco Nazarene Church. As well as being a beloved member of the church, she held numerous positions there, from Sunday School teacher to Missionary president, and served on the board. Ida was always an advocate for her five grandsons, who lovingly called her "Nan". They were her joy. She was always there to listen, play a game, or fix something delicious to eat. She attended their sports games, birthday parties, and music concerts. Her home always had an open door for friends and family. Ida treasured her family, as they did her. Ida was preceded in death by her husband Harvey Austin. She is survived by her children Kari and Harvey Harold (Heather); grandsons Christopher (Margerita), Curtis, Tyler (Kellie), Harvey Aidan, and Colm; six great grandchildren; two brothers Garry and Merle, their spouses, and children. A funeral service will be held at Mueller's Tri-Cities Funeral Home in Kennewick on Sunday, March 1 at 2:00 p.m., with a viewing from 12:00-2:00 p.m.

Ida Belle (Elliott) Hart of Pasco, Washington, passed away on February 13, 2020 with family by her side at a memory care facility in Kennewick, after a long illness. She was born October 16, 1938 to Frank and Maude Elliott. She spent her early... View Obituary & Service Information

The family of Ida E. Hart created this Life Tributes page to make it easy to share your memories.

Ida Belle (Elliott) Hart of Pasco, Washington, passed away on...