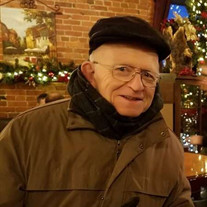 On September 14th, 2021, Howard Ellis Wellsfry died peacefully at his home surrounded by his family. He had fought a tremendous battle with Parkinson's and sepsis. He was 87 years old. Howard is survived by his children, Rebecca (Wall), Dean (Wellsfry) and Cheryl (Smith) all of the Tri-Cities, Washington. He is also survived by his youngest brother Ralph Wellsfry of Colorado. He was preceded in death by his wife of 52 years Betty (Vrieling), his parents (Edna and Walter Wellsfry) and all of his six older brothers (Wilson, Bob, Frank, Gene, Ward, and Jack). Rebecca Wall's family Husband Jeffrey, children: Curtis (Amanda), Kellye (James) and Kathryn (Marcus). Dean's family (Gina, children: Brock and Bryce), Cheryl Smith's family (Husband Ed, children: Jill, Andrew and Luke). He also had four great-grandchildren: Lilly, Calvin, Natalie and Cecilia. Howard was born on January 9, 1934, in Chico, California. He graduated from Chico High School in 1953 and Multnomah Bible College in 1956, earning a Bible degree. He went on to attend California State University (Chico) where he attended from 1956-1963 earning a degree in Civil Engineering. His college years were interrupted by being drafted and serving 21 months for our United States Army in Hawaii (1958-59). He was in army reserves until July 1963. He retired from engineering in 1996. Howard was the seventh of eight boys. He knew how to tell a good story, and we enjoyed the tales he often told of his mischievous childhood. He grew up during a time when he saw the first car come to his town, used a slide ruler instead of computer for engineering, and remembers the ice man delivering ice for their ice box (instead of a refrigerator). Howard married Betty (Vrieling) in 1963 after meeting her many years earlier at Multnomah Bible College in Portland, Oregon. He was a devoted and faithful husband. Howard enjoyed traveling and took many trips with Betty to different places around the world. They enjoyed many trips to the beach. He was especially fond of his little dog, Roxie, later in life. During his younger years he enjoyed singing in church, playing tennis, camping, backpacking, gardening, genealogy, reading history books, fishing, watching football and downhill skiing. He loved spending time in the outdoors. Howard held many engineering positions over the years. He worked for state of California highway department, city of Fremont, California, and then in 1978 transplanted his family to Kennewick, Washington to work for the nuclear power plant. Howard also spent time working on Priest Rapids and Wanapum Dams, and for Grant County as an engineer. Howard joined the Navigators while in the army, which lead him to spend his lifetime getting to know who Jesus Christ was. He volunteered for Campus Crusade and Young Life. He enjoyed serving in the Benton County Fair at the Young Life booth, and playing Santa during their Festival of Trees. He and Betty hosted many Bible studies in their living room over their married life. He spent many years in Bible Study Fellowship, both attending and in leadership positions learning and studying God's word. He also spent time as a Gideon, helping distribute Bibles around the Tri-Cities region. During his last few years, he listened to the Bible over and over again. He found great comfort from God's word, especially the book of John. As his children, we witnessed how Christ worked and changed him into an ever gentler, giving, and kind man. He had a simple faith, and we witnessed that, truly, Christ is for real. There is no other explanation for how a man can transform so much in one lifetime without the work of Christ in him. A graveside burial ceremony for Howard's family is scheduled for Saturday, October 23rd at Desert Lawn Memorial Park at 2pm. A "Celebration of Life" service and reception for family and friends will follow at 3 pm at Grace Baptist Church at 4403 W 10th Ave., Kennewick, Washington. The family has designated Gideon's International and Young Life for memorial contributions in Howard's memory. Gideons International | Donate or Give - YoungLife.org

On September 14th, 2021, Howard Ellis Wellsfry died peacefully at his home surrounded by his family. He had fought a tremendous battle with Parkinson's and sepsis. He was 87 years old. Howard is survived by his children, Rebecca (Wall), Dean... View Obituary & Service Information

The family of Howard Ellis Wellsfry created this Life Tributes page to make it easy to share your memories.