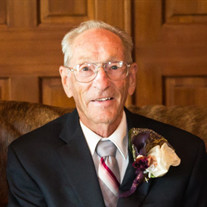 Hollis Roy Morris, age 89, of Kennewick, entered eternal rest on March 30, 2021. He was born on December 2, 1931 to Victor and Georgia Morris in Chewelah, WA where he was raised with his six siblings. Hollis graduated in Chewelah from Jenkins High School in 1950. In 1951, he joined the U.S. Navy during the Korean conflict as a Damage Control Engineer on the USS Baltimore CA68. He traveled the Mediterranean Sea and went to Gibraltar, Spain, France, Italy, Greece and Turkey. They sailed to Spithead, England to participate with 230 ships from other nations in the coronation of Elizabeth II. The USS Baltimore represented the U.S. in the Queen's review of the fleet. He served honorably from 1951 to 1955. The following year, while attending Eastern Washington State College in Cheney, he met the love of his life, Kara Lea Elston, and they were married at Hillyard United Methodist Church in 1957. Their first child Victor was born in 1958 and in 1959 he graduated with a B.A. in Education. They moved to Sunnyside in 1959 where Hollis began his teaching career at Sunnyside High School, teaching math and driver's education. Alan was born in 1959 and Karolyn in 1961. Hollis was hired by Kennewick High School in 1962 to teach drafting, woodshop and metal shop, so the family moved to Kennewick. Ron was born in 1966. Hollis began teaching at the newly constructed Kamiakin High School in 1971, teaching mechanical drawing, industrial arts, math, and driver's education. In 1970, with the help of family and friends, Hollis designed and built his own home of 50 years. He spent many years tending a large garden that he planted in his backyard. He loved taking his family camping every summer to many special destinations of which his children have fond memories. As a member and president of the Columbia Basin Horseshoe Club, he traveled great distances to pitch in many horseshoe tournaments, including world tournaments and often encouraged others to play, including his grandchildren, some who participated and traveled with him. In addition to raising their own children, Hollis and Kara hosted foreign students, Osni from Brazil, Victor from Paraguay, and Richard from Taiwan and later traveled to Brazil and Paraguay to visit their families. After retiring, Hollis participated in many activities and volunteered much of his time to Kennewick First United Methodist Church, Habitat for Humanity, Master Gardeners, SE Wash. Industrial Arts Assoc., and Wash. State Retired Teachers Assoc., U.S. Navy Cruiser Sailors Assoc., and The American Legion. His faith was demonstrated by devoting decades of his spare time to his church by helping with repairs, remodels, tending the roses, serving on the board, and participating annually in the church rummage sale as the plant salesman. He was a handyman and blessed his children and many others with his carpentry skills and enjoyed crafting wooden toys for his grandchildren. In 2015, he was privileged to participate in an Honor Flight to Washington DC to recognize his service to our country. Hollis will always be loved and cherished by his family including forty grandchildren and great-grandchildren whose lives he enriched in countless special ways. His life of service, love of his community, and dedication to his family set an example that will live on and be remembered by future generations. He will be dearly missed. Hollis is survived by his devoted wife of 63 years, Kara; his brothers, George Morris (Connie) and Charles Morris (Jeri); his sisters, Anna Mae Jennings (Jim), Velma Churchill, and Rosa Nett (Jim); his four children, Victor Morris (Jennifer), Alan Morris (Kim), Karolyn Hopper (Kirby), and Ronald Morris (Karena); eighteen grandchildren, and twenty-two great-grandchildren. He was proceeded in death by his brother Arthur Morris (Nancy). A private memorial for family will be held at Mueller's Funeral Home followed by a graveside service for friends and family at Desert Lawn Memorial Park, 1401 S Union St in Kennewick on Monday, April 12, 2021 at 2 PM. Guests are invited to bring a flower to place at the grave site in honor of Hollis' love of gardening.

Hollis Roy Morris, age 89, of Kennewick, entered eternal rest on March 30, 2021. He was born on December 2, 1931 to Victor and Georgia Morris in Chewelah, WA where he was raised with his six siblings. Hollis graduated in Chewelah from Jenkins... View Obituary & Service Information

The family of Hollis Roy Morris created this Life Tributes page to make it easy to share your memories.