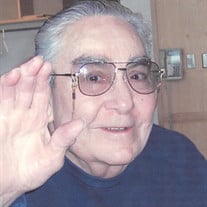 Henry Joseph Blazon Jr. was born to Ruth Blazon (nee Rendon) and Henry J. Blazon in Longmont, Colorado in 1929. In high school, he applied and was accepted to an out of state technical school to begin learning his trade as a machinist. Later, after graduation, he served in the Army where his skills were further developed and put to use during the Korean War. In 1957, he married his wife Elmira Ephlin at St. Joseph's Catholic Church, and together they raised their family in Kennewick and Richland. Henry worked within the nuclear industry as a highly skilled machinist, first with a few companies before settling with Battelle Laboratories where he served for 43 years. He retired in 1989. He and his wife enjoyed many hobbies, including billiards, bowling and camping. Henry was a devoted and loving father who coached his son's baseball teams and saw to the care of his family of 10. For many years he sent his children to St. Joseph's school in Kennewick, and later to Christ the King. He and Elmira happily were married for 48 years before she preceded him in death in 2005. Upon retirement Henry and Elmira moved to their property at Badger Lake outside of Cheney, Washington, a place known as a family refuge for over 30 years. Badger Lake and their warm, hospitable home will forever be the best place our family and friends had the privilege of experiencing. Henry Blazon died on 2/1/2020 at his residence in Prosser. He will be forever remembered for his sense of humor and dedication to his family. Anyone who was blessed to know Henry was exposed to his fun-loving and quick-witted personality, concern for others as well as his sometimes-quiet reserve. Henry is survived by his sister Madeline Layne. He will be truly missed by his 7 remaining children and their spouses, Gary and Denise Browning, Patty and Walter Steel, Kay and Pat Woodruff, Joann and Terry Brown, Frank and Marilyn Blazon, Michelle and Ramon Susilla, and Amy and Jim Hull. Henry is survived by 18 grandchildren: Scott, Kimberly and Christie Larson; Ronnie and Christopher Browning; Guy and Mathew Steel; Elmira Utz and Patrick Woodruff; Terry Brown Jr. and Heidi Morris; Michael and Anthony Blazon; Monica Susilla; and Kayla and Kyle Hull. Henry is also survived by 21 great-grandchildren. Viewing will be Thursday, February 13 from 1:00 p.m. to 8:00 p.m. with Recitation of the Holy Rosary at 7:00 p.m. at Mueller's Tri-Cities Funeral Home, 1401 S. Union Street in Kennewick. Funeral Services will be Friday, February 14 at 1:00 p.m. at Mueller's Tri-Cities Funeral Home with interment to follow at Desert Lawn Memorial Park. Please join the family in celebrating Henry's life.

Henry Joseph Blazon Jr. was born to Ruth Blazon (nee Rendon) and Henry J. Blazon in Longmont, Colorado in 1929. In high school, he applied and was accepted to an out of state technical school to begin learning his trade as a machinist. Later,... View Obituary & Service Information

The family of Henry Joseph Blazon Jr. created this Life Tributes page to make it easy to share your memories.