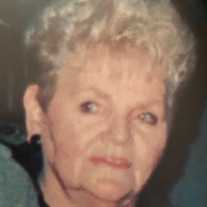 JoAnn H. Tibbs was born in Greeley, Colorado on January 25, 1931. She passed under the care of Fieldstone Memory Care on 8/12/2021. JoAnn was the oldest of three to Buck and Louise Gooch. In the early 1940's roller skating was a popular sport sought by both youth and adults. JoAnn was an avid Roller Skater that enjoyed both teaching and competing in both skate dancing, and figure skating. JoAnn met her life sweetheart, Bill Tibbs, at a roller-skating rink in 1946. Three years later, JoAnn and Bill married on May 14, 1949 in Troutdale, Oregon. They were eventually blessed with three beautiful children: Bill, Janie and Debbie. JoAnn put herself through Cosmetology School and began her career as a hairdresser in her early 30's. Shorty after, Bill and JoAnn turned their one car garage into a "Retro" 1960's Beauty Salon that included state of the art equipment. JoAnn had a wonderful sense of style and fashion and was known for having a "Glamours" look that was often envied by other women. She was quick-witted and treated her clients as an extension of her family. She regularly put in 12-hour days to help with client and family needs and was still working part-time into her 80's in a successful career that lasted over 50 years. Oil painting became one of JoAnn's favorite hobbies as she discovered her natural talent for creating abstract art. She often used a wet-on-wet oil painting technique to create beautiful mountain landscapes, colorful flowers, winter scenes and elaborate forests. JoAnn was a devout member of the Kingdom Hall of Jehovah's Witnesses. She honored Jehovah, his Kingdom and was proud to be a Christian. JoAnn was preceded in death by her husband, Bill, in 2009 where they celebrated 60-years of marriage. Her parents Buck and Louise Gooch, Sister Carolyn Schuster and infant brother, Kenneth Gooch. JoAnn is survived by her son, Bill Tibbs, Janie Tibbs and Debbie (Pat) Loftus; seven grandchildren: Rick Bean, Nikki (Greg) Kaiser, Dustin (Dara) Morantes, Tim (Krista) Blair, Crystal (Jeff) Schell, Angie (Matt) Loftus-Canuel and Nick (Kayci) Loftus: ten great-grandchildren; Sydney and Dalton Kaiser, Carson and Reagan Blair, Cassidy, Chloe and Karlee Schell, Kyden and Kendyl Loftus, Adelyn Loftus-Canuel. The family is planning a private gathering in celebration of Nonie's life. Cremation is under the direction of Mueller's Tri-Cities Funeral Home. Memorials may be made to the Hospice at the Chaplaincy, 2108 W. Entiat Ave. Kennewick, Washington or to .

JoAnn H. Tibbs was born in Greeley, Colorado on January 25, 1931. She passed under the care of Fieldstone Memory Care on 8/12/2021. JoAnn was the oldest of three to Buck and Louise Gooch. In the early 1940's roller skating was a popular sport... View Obituary & Service Information

The family of Helen Joan Tibbs created this Life Tributes page to make it easy to share your memories.