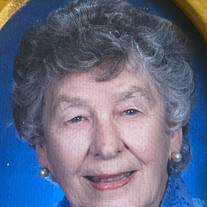 Helen Elizabeth Atwood, age 98, died on April 13, 2020, at Trios Hospital in Kennewick. Helen was born in Seattle, Washington, on January 28, 1922, to James D. and Helen (Senter) Scott. She attended Roosevelt High School in Seattle, graduating in 1940. After graduation, she attended the University of Washington, obtaining a BA in Education. She went on to Columbia University in New York City to obtain her Masters Degree in Education. Helen began her teaching career after obtaining her MA. She came to Richland in 1952. She stopped teaching after her first child was born, and spent many years as a homemaker. She returned to teaching, primarily as a substitute, in 1972. She regularly substituted at Kennewick High School until her final retirement. While living in Richland, she met John Atwood. They were married on August 10, 1952. They remained married until John's death on February 12, 2006. Helen and John were a very musical couple. Helen played the piano and sang. One of their favorite activities was singing in the church choir. Helen spent over 45 years in the choir at the First Presbyterian Church in Kennewick, where she was a member of the church since 1959. She made many friends and formed many lasting relationships through the church. Helen and John enjoyed traveling with family and friends. There are many fond memories of fishing trips to Twin Lakes, cruises to foreign lands, and Elder hostels. They spent each November on Maui for many years. They built a beach house on Whidbey Island and enjoyed spending time there. Helen was an avid gardener. She always grew many beautiful flowers. She was an accomplished bridge player. She and John played bridge for many years. Helen was an active member of PEO. She maintained many long-time friendships with her PEO sisters. They were steadfast supporters, particularly over the last few years as Helen's health slowly began to fail. Helen is survived by her three sons: Joseph Atwood and his wife Bonney of Puyallup, their sons Christopher (Jen) and Matthew (Kate) Steven Atwood and his wife Julie of Seattle, their son Tony, and Thomas Atwood and his wife Teri of Kennewick, and their daughters Desiree (Andres) and Jennifer (Brian). She also leaves ten great-grandchildren. She was predeceased by her parents, her brother James M. Scott, and daughter Laurie Anne. A private graveside service will be held. A memorial service will be held at the First Presbyterian Church in Kennewick on a later date when the COVID-19 restrictions are lifted and we can all gather together to celebrate her life. In lieu of flowers, memorials may be made to the First Presbyterian Church of Kennewick Memorial Fund.

The family of Helen Elizabeth Atwood created this Life Tributes page to make it easy to share your memories.