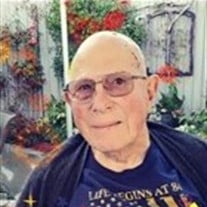 Harvey Tenny was born to Agaitha Lee Tenney and William Lee Pickens on September 1, 1933 in Long Beach, California. Agaitha had contracted tuberculosis and was otherwise confined to an asylum in Arizona. The effects of the 1933 Long Beach earthquake and the Great Depression left William Lee unable to care for Harvey, so he was placed in foster care in the home of Frances Pruitt and was relocated to Banks, Oregon, where he grew up. He married Beverly Matthews in 1954 and they had three children: Bill, David, and Kathy. Harvey worked as a chemist for General Electric, but was recruited to Battelle NW to lead the light spectroscopy program in Richland, Washington. He married Delores Almarode in 1984 and they were happily married for thirty-one years until her death. After Delores' death, Harvey said he became "twitterpated" with the loving and caring heart of Linda Matson and convinced her to a short engagement, but promised her a minimum of 10 years of marriage. On September 12, 2015, Harvey married Linda; they spent just six short wonderful years together until his death from Parkinson's. Harvey's six years of influence on Linda's entire family has been life changing. His great-granddaughters, Bailee and Emilee, will be asking, "Where is Pop Pop?" Lori especially was devoted to Harvey's care. Harvey was so afraid of falling and Lori would talk him through to help ease his fear. Lori would come to Harvey's aid throughout the day and night to transfer him and make him feel safe. He is survived by his loving and devoted wife, Linda Tenny, children; Bill (Kris) Tenny-Brittian, David (Cynthia) Tenny, Kathy (Jim) Whitescarver, Marshall (Sherrie) Almarode, Robert Almarode, Cindy (Duane) Walker, John Schnell, and Lori (David) Hagadorn. Harvey has many grandchildren, great-grandchildren and one great-great-grandson. The family wishes to thank the nursing staff provided by Professional Case Management, especially Jennifer, Nicole, and Marcell who went above and beyond in helping us through all the processes. The Hospice care from Chaplaincy Health Care was so amazing in the care they gave Harvey and the family. Services will be as follows: Graveside at Mueller's Desert Lawn Memorial Park on Saturday, October 16, 2021 at 9:00 am. After the graveside we will immediately go to Crossview Church for light snacks. The Memorial Service at Crossview Community Church will start at 1:00 pm. In lieu of flowers, please consider a donation to Chaplaincy Health Care: 1480 Fowler St, Richland, WA 99352; or the benevolent fund at Crossview Community Church 540 N. Colorado St, Kennewick, WA 99336 in Harvey's name.

Harvey Tenny was born to Agaitha Lee Tenney and William Lee Pickens on September 1, 1933 in Long Beach, California. Agaitha had contracted tuberculosis and was otherwise confined to an asylum in Arizona. The effects of the 1933 Long Beach earthquake... View Obituary & Service Information

The family of Harvey Tenny created this Life Tributes page to make it easy to share your memories.